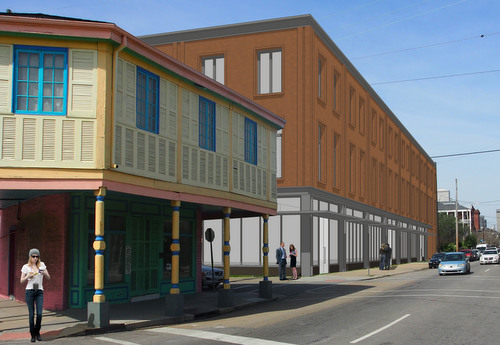 The new development proposed for Magazine Street between Richard and Felicity streets. (rendering by Studio WTA, courtesy of Wayne Troyer)

A large, long-vacant lot on Magazine Street in the Lower Garden District is now planned to become home to a new development with ground-floor commercial space and apartments above, the New Orleans-based developer told neighbors this week.

Tom Winingder, whose company is also renovating the nearby St. Anna’s Residence on Prytania Street, said the lot on Magazine at Richard Street will have a three-story building with 36 apartments, as well as 4,750 square feet of commercial space along Magazine Street, echoing the layout of other nearby blocks of Magazine.

“We’re trying to base this off a traditional model you see on Magazine Street, where you have commercial on the ground floor and residential above,” architect Wayne Troyer told the Coliseum Square Association on Monday evening.

In response to questions from the association, Troyer said no tenant has been selected for the commercial space, and it is really to early to begin figuring out how that part of the project will be divided up. The developer plans for the business use to be in keeping with Magazine Street, however.

“We would like to keep it local,” Troyer said. “There’s been no talk of trying to bring a big box in.”

Nine of the apartments will have one bedroom, and the other 27 will be two-bedroom units. They may be marketed to people seeking second homes in New Orleans who want to enjoy the pedestrian-oriented lifestyle of Magazine Street, Troyer said.

The project is designed to fit into current zoning requirements for the site, and will include 54 parking spaces within the lot. The ground floor on the front of the building will have 17-foot ceilings, so that the parking can fit under the three stories of apartments in the rear, Troyer explained.

“The ideal is not to see parking from the street,” Troyer said, also adding in response to another question that no on-street parking will be eliminated for loading zones.

Troyer noted that in his 21 years of living nearby, his only memory of use of the site is as a community garden. The architecture is being designed with the historic context of the neighborhood in mind, with a glass facade and iron columns on the ground floor, and brick above, he said.

“We think this is a respectful and responsive building that relates very much to Magazine Street,” Troyer said. “We’re definitely looking for a building that’s in a traditional mode. We don’t want this building to look like it’s from 1865, but we want it to have the spirit of that era.”

The developers have yet to file with the Historic District Landmarks Commission, but plan to do so later this month, they said.

Following Troyer’s presentation, the Coliseum Square Association voted to support the project pending the recommendations of the HDLC.