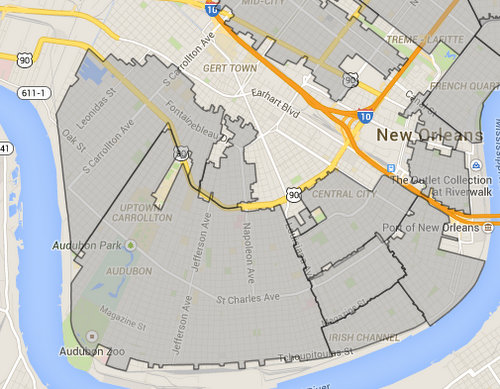 The Carrollton and Uptown historic districts (the two large areas on the left) may be subject to stricter scrutiny for new construction. (map via nola.gov)

New construction across much of Uptown, Carrollton and Broadmoor could be regulated as closely as it is in the Irish Channel or Garden District, based on the results of a study authorized by unanimous vote of the New Orleans City Council on Thursday morning.

City Councilwoman Stacy Head introduced her proposal by noting the city’s growing debate over how to handle demolitions of historic properties, which has sharply split otherwise-allied Council members several times over the last year. A related issue, Head said, is how the city regulates what is built following the demolitions.

The Historic District Landmarks Commission already regulates construction and renovation in certain areas of the city — most closely in the Irish Channel and the Lower Garden District, but also to a lesser degree in the Garden District, Head said. But outside those areas, developers who disrespect the city’s history are contributing to “death by a thousand nicks” of its architectural landscape.

“New construction is not regulated at all, except for basic building codes,” Head said.

Thursday’s motion authorizes a Historic Preservation Review Committee to begin studying whether to expand the HDLC jurisdiction to all the area included in the Uptown, Carrollton and possibly also the Broadmoor historic districts.

Currently, at properties in the Irish Channel or Lower Garden District, the HDLC must approve any renovation (short of a paint job or landscaping) that is visible from the street. In the Garden District, all new construction is regulated, but not renovations. Which type of HDLC oversight to apply to the new areas will be part of the committee’s discussion, Head said.

Expansion of the HDLC could also mean that demolitions in those areas would fall under that agency’s review, rather than the Neighborhood Conservation District Advisory Committee that currently oversees them. The HDLC’s decisions can be binding (though they may be appealed to the City Council), unlike the NCDAC, which merely makes recommendations that automatically require City Council approval.

Expansion of the HDLC, Head noted, does not mean that modern architecture will automatically be disqualified, Head noted. In fact, it may sometimes be preferred, as long as it is of the appropriate scale with the surrounding neighborhood, she said.

City Councilwoman Susan Guidry, who is frequently allied with Head on issues related to historic properties, agreed that under current law, historic buildings outside the HDLC area can be “altered beyond recognition” by builders. But she promised that the study committee will provide ample opportunity for public input as it shapes its recommendations.

“It is only, at this point, a study,” Guidry said.

Head and Guidry were the only council members to speak on the issue before it quickly passed by a 6-0 vote — including Councilwoman Nadine Ramsey, who has sometimes criticized the application of historic-preservation laws. City Councilwoman LaToya Cantrell, who represents much of the affected areas but has expressed similar concerns to Ramsey’s, was absent from Thursday’s meeting as she is representing the city on a Rockefeller Foundation mission to Europe, Head noted.

The committee will be comprised of seven members appointed by Mayor Mitch Landrieu and appointed by the City Council.