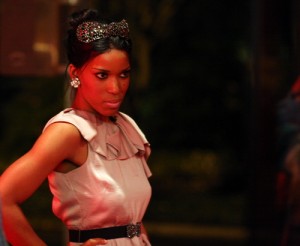 Aurielle Brimmer poses for photos on the red carpet outside Prytania Theatre prior to the annual Oscar-watching party in 2012. (Robert Morris, UptownMessenger.com)

Scientist Alan Turing, the superhero “Birdman,” as well as the Hollywood glitterati — the Prytania Theatre is saving room for all of them on the red carpet Sunday night, when the New Orleans Film Society hosts its annual Academy Awards watching party and costume contests.

Doors open at 6 p.m. Sunday, Feb. 22, for the party, which will be hosted by Amanda Rose and The Second Line Show Sketch Comedy Troupe. Moviegoers will compete for two of their own awards, Best Costume Inspired by a Nominated Film, and Best Red Carpet Costume.

Admission, which includes food and drink, is $20 for New Orleans Film Society members and $25 for the general public. For details, see the information from the Film Society:

Enjoy the Oscars® on the big screen! Join the New Orleans Film Society’s unofficial screening of the 87th Annual Academy Awards® at the Prytania Theatre on Sunday, February 22. Red carpet, film trivia games, and two costume contests-one for Best Costume inpsired by a nominated film, and another for Best Red Carpet Costume-during commercial breaks. The event will be hosted by Amanda Rose and The Second Line Show Sketch Comedy Troupe.

ABOUT THE HOSTS
Since the age of 5 years old, Amanda Rose has never missed an opportunity to be on stage, in front of a crowd, and making people smile. A professional host for over 10 years, she has graced numerous large scale events, celebrity interviews, and red carpet affairs. Lead Actress and Host for 2-Cent TV and Creator of the up and coming hit Sketch Comedy Troupe “The Second Line Show”.

The Second Line Show is a live variety and sketch comedy show inspired by an eclectic group of actors and artists who combined have over 100 years in entertainment experience. With the latest craze of “internet sensations” and “social network star” styled entertainment, The Second Line Show brings back the exciting and genuine feel of live performance. All growing up watching the classic sketch comedy shows like In Living Color and Saturday Night Live; this crew asked, “What would those shows look like if they were New Orleans influenced?”, and out of that question the comedy troupe was born. With a residency at Gasa Gasa, The Second Line Show brings hilarious and witty comedy to their audience monthly and possess a universal feel while giving a light into the wondrous culture of New Orleans.