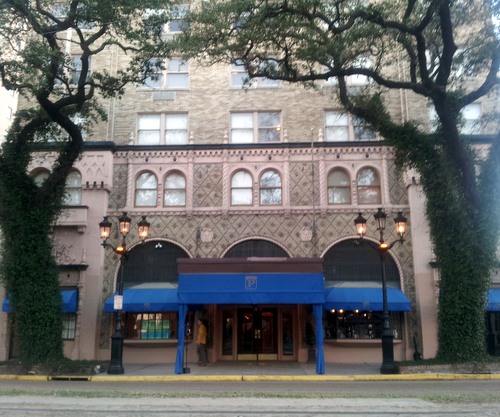 With plans for a rooftop lounge and a restored Silver Whistle coffee shop on the first floor, The Pontchartrain Hotel on St. Charles Avenue is intent on reclaiming its historic prominence in New Orleans, its owners say — right down to the classic blueberry muffins.

The Pontchartrain Hotel at 2031 St. Charles Avenue was established in the 1920s and boasts a history of hosting icons such as Rita Hayworth, Frank Sinatra and Truman Capote and presidents Gerald Ford and Ronald Reagan. After Hurricane Katrina, however, it shifted focus toward luxury apartments for retirees or extended-stay rooms for guests in town for a month or more.

In 2013, however, the Pontchartrain changed back to a hotel, converting its apartments back into hotel rooms and re-establishing live music in the Bayou Bar (which had been halted during a city permit sweep).

Now, the Pontchartrain is returning to the City Council for further renovations — renovating its 106 hotel rooms, converting a rooftop penthouse into a lounge, and restoring the Silver Whistle coffee shop and restaurant on the ground floor.

“We are excited to announce plans to restore the Pontchartrain to its former prominence and stature while breathing a new life into its interior space,” wrote owner Brad Nichols of Chicago-based AJ Capital Partners in a report shared with the City Planning Commission.

No one spoke about the project at the CPC meeting, and emails included in the commission report were generally supportive. Neighbor and cookbook author Kit Wohl said in her email that she is sure it will be a success, but noted that, “The hotel lost considerable goodwill when it eliminated the blueberry muffins that little old ladies used to slip into their purses. So silly. Who knew what wrath would ensue?”

Wohl said she had a copy of the original recipe that she could share with the hotel’s new chef, if the owners were interested. Nichols, however, assured Wohl that the original muffin recipe has been closely guarded over the years, and that it would soon make a return.

“The blueberry muffin is absolutely coming back as soon as we reopen,” Nichols wrote to Wohl. “While that’s a recipe that we do have in the hotel safe, I would be extremely interested in any others you may be willing to share with our new chef.”

The commission quickly approved the plans Tuesday, sending it to the City Council with a unanimous positive recommendation. The hotel plans to start construction in April 2015 and conclude by January 2016.