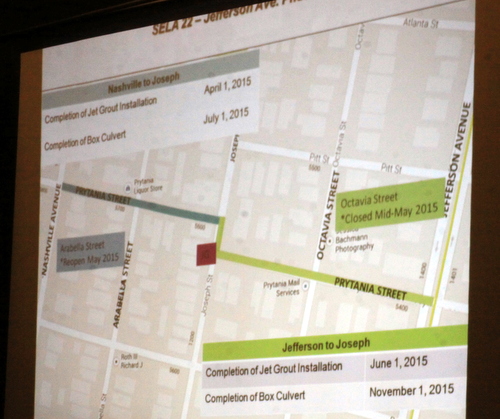 A slide presented by the U.S. Army Corps of Engineers on Tuesday night explaining timetables for work on Prytania Street. (Robert Morris, UptownMessenger.com)

Two-story black tarps around the drainage-canal construction site on Prytania Street in Uptown New Orleans create dark tunnels that residents must walk through after parking blocks from their home, creating a scenario so unbearable that neighbors begged officials Tuesday night to drop the project altogether and simply leave.

While abandoning the Prytania Street leg of the SELA project is not an option, officials with the city and the U.S. Army Corps of Engineers promised that the work is now speeding up, with relief for residents in store in the weeks and months ahead.

The construction that has closed Prytania between Nashville and Jefferson is officially part of the Jefferson Avenue Phase 2 portion of the Southeast Louisiana Urban Flood Control Program, and is designed to relieve street flooding from heavy rains along Nashville Avenue. The total $46.2 million Phase 2 (which runs on Jefferson from Dryades to Constance, and is separate from Phase 1 between Dryades and South Claiborne) began in January 2013, and has an estimated completion date of March 2016. 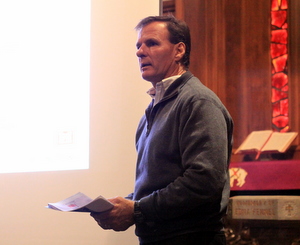 The Prytania Street leg should be finished sooner, however, said John Fogerty, the resident engineer for the U.S. Army Corps of Engineers, at a meeting with residents Tuesday night. The construction of the box culvert on Prytania between Nashville and Joseph should be finished by July 1, and the section between Joseph and Jefferson by Nov. 1, with about a month after each date to rebuild the street over the new canal.

The project so far, however, has been far more difficult to live with than anyone expected, neighbors said in a tense, two-hour session. With the road closed, they are concerned about the ability of fire trucks to reach their homes — an issue that New Orleans Fire Department Superintendent Tim McConnell said was the subject of significant training hours.

Firefighters in the area, McConnell said, have been training on a technique of carrying large hoses with connector valves to the property in question, and then hooking smaller hoses to that. The process can add about a minute to firefighters’ set up time compared to having a truck simply pulling up to the property, but it’s the same technique used in large apartment complexes where trucks cannot drive straight to the apartment unit that needs them.

“It is not ideal. It is not the fire truck being in front of your house,” McConnell said. But firefighters have also created detailed maps of the construction area to pinpoint the best approach for any incident, he said. “There are a lot of steps we’re taking, and training on a regular basis. We are taking every step we can to make sure we can respond the best possible way given the circumstances we have.”

The reduced fire coverage is only one threat, residents said. To shield the houses from the messy jet grouting that provides the foundation for the box-culvert construction, contractors have raised large tarps around the site. The tarps, however, darken the street and hide the sidewalk, making residents fear that they are easier targets for armed robbers.

Residents begged the Corps have the contractor lower the tarps at the end of the workday, but Fogerty said that would add about an hour of work time at the beginning and end of each day, slowing down the project significantly. But the jet grouting is nearly finished in the narrower, Nashville to Joseph section of Prytania, he said, and when it moves to the wider Joseph-Jefferson section, the tarps won’t be as needed.

“We don’t want a black tarp 20 feet high covering our house,” said Marina Palumbo Simoneaux, another resident. “You are too close to our homes, and this is massive construction. It was not well planned, and it is not well communicated.”

Echoing the concerns of neighbors across the Uptown construction zones, Prytania residents said they are also concerned about the impact of the heavy trucks rolling down side streets to access the site. The streets are being left in deplorable condition, they said.

Repairing the side streets is not within the purview of the SELA contract, but Dani Galloway of the city’s Department of Infrastructure promised that New Orleans officials are creating a plan to come in and perform some repairs when the project is finished.

“It’s not going to be a brand new street, but they will fix the potholes,” Galloway said.

Neighbors repeatedly asked the Corps to simply drop the project, calling the large new canal “overkill” on such a small neighborhood street. Others asked that they go ahead and increase the work time to 24 hours a day, just to get it over with.

Abandoning the project was obviously out of the question, officials said, and even speeding it up is unlikely, said Ricky Boyett, a Corps spokesman. To speed it up would increase the cost, creating the possibility that the project could just run out of money, he said.

In the meantime, City Councilwoman Susan Guidry pledged to personally try to create a communication system within City Hall to coordinate other work is needed in that area. For example, if Parks and Parkways is sending tree trimmers onto one street, other departments should know so that they don’t burden the neighborhood with another work crew at the same time.

Further, Guidry said, she will continue investigating specific solutions to individual quality of life problems, like the placement of the tarps or letting residents access the street when work is not taking place.

“The black tarp thing has freaked me out totally,” Guidry said.

The good news, Fogerty said, is that the most difficult parts of the Prytania project are now complete. What is left is the relatively simple construction of the box culvert itself, and repaving the road, and residents should see much more visible progress moving forward through the summer.

“We’re through a lot of the complexities of this project,” Fogerty said. “We’re at the easiest part of the project, building the box culvert. That goes quick.”