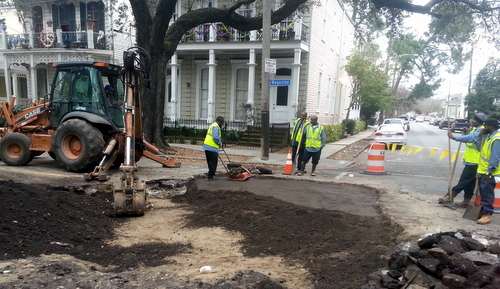 Workers patch up a section of Magazine Street on Friday afternoon after digging it up to find a sewer leak that shut down the street. (Robert Morris, UptownMessenger.com)

The majority of the repairs needed to an underground sewer line that was causing part of Magazine Street to sink should finished by Monday, but the street will remain closed to most drivers near Third Street through the weekend, officials said.

The street was closed in the 2500 and 2600 blocks Friday for “excavation,” officials originally said. The street was forming a depression in both lanes near Third Street, and workers needed to get underground to determine what was causing the roadway to sink, said Robert Jackson, spokesman for the Sewerage and Water Board of New Orleans.

After that exploratory work, they determined the problem was related to a sewer line that runs along the river-side sidewalkin the 2500 block, Jackson said. To fix the problem, workers will only need that side of the street, so the opposite lane will be kept open to allow the Magazine Street buses through.

All other drivers will still be detoured around Magazine between Second and Third Streets, Jackson said, but the work is only expected to take from 8 a.m. to 5 p.m. Saturday and Sunday.

“It depends on the nature of it and the extent of it, but everything should be complete by Monday,” Jackson said.

One thought on “Major repairs to Magazine to be finished Monday, officials say”