Author’s Note:  Owen is inconsolable this week after the passing of yet another needless, paternalistic ordinance by the New Orleans City Council.  Following a mental breakdown, Owen now believes himself to be Bland Landers, an imaginary cantankerous brother of noted advice columnist Ann Landers.  Thus, the following advice column will run today in place of Owen’s usual rantings.

My husband and I recently moved in next to a longstanding juke joint, and as we anticipated, it’s far too noisy.  Adding insult to this complete absence of injury, they’re also having music more often that they used to because the bar has become more successful (which also means more people loitering around, which makes me nervous for reasons I usually discuss in vague, coded language).  I’ve called the police out several times without warning to harass them, but nothing ever gets done.  What do I do?

— Batty in the Bywater

I’ve got the perfect recipe. The first step is to squeeze one cup of fresh lemon juice.  I find this works better than the junk from concentrate you get in the store.  Put the lemon juice in a large mixing bowl.  Next, add five tablespoons of finely ground sea salt and one full bottle of iodine.  Mix the ingredients together and then pour the contents into a blender.  Finally, turn the blender on ‘high’ and jam your both of hands in as hard as you can.  I guarantee the juke joint will no longer be on your mind — problem solved!

I own a shotgun double Uptown just off of Magazine with no off-street parking.  Now obviously, I own the section of street in front of my house.  I mean, it’s right there.  Everybody knows that.  Nevertheless, people keep parking there anyway like it was public property or something.  I usually remember to leave a cone or an old sawhorse outside to block off my parking spaces, but it’s a huge pain and sometimes I forget (And some people even move the obstructions and park anyway! The nerve!).  How do I protect my spaces?

I’m afraid the diagnosis is grim.  You suffer from Parkingnazitus, known by lay persons as “Parking Nazi Syndrome.”  It results in a delusional belief that proximity to a public parking space somehow endows you with property rights over it, whether legally or by social convention.  Unfortunately, the only cure is to lie down in the street that you irrationally claim to be yours and wait to be crushed by a passing bus.  Freed from your earthly body, your spirit will forever be bound to that spot to haunt those who use “your” space without your permission (For more information, please consult the famous 1982 documentary on the subject, “Poltergeist”).

I live across from an old corner store that, until recently, had been blighted for years.  Last year it was renovated, and now the owner wants to open up a coffee shop and is seeking a zoning change (it was zoned residential).  That’s spot zoning, which is evil and should never, ever be permitted ever because the law says so and the law should never, ever change.  Other than complaining endlessly at neighborhood association meetings and speaking in a contemptuous, nasally voice before the city council, is there anything else I can do to crush my new neighbor’s entrepreneurial dreams?

Very interesting quandary you have there.  It used to be that I’d advise you to stick your own head up your keister for opposing such a low-impact commercial use in a historically-commercial structure.  However, that was before I found that the “Master Plan” being promulgated is less of a regulatory concept that it is an actual monster that breathes fire to destroy illegal land uses.  The following is an accurate artist’s depiction of the Master Plan in action: 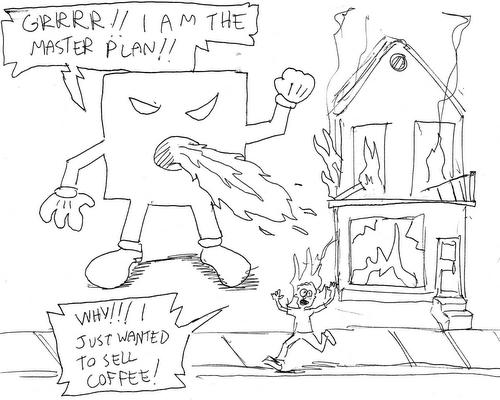 (Illustration by Owen Courreges for UptownMessenger.com)

Obviously, with this abomination’s insatiable urge to eliminate illegal land uses and its near limitless power, there’s really no reason for you to fight that nefarious coffee shop from moving in.  Just leave it up to the Master Plan.  You’d probably just get in his way if you interfered.

[Another author’s note: Letters requesting Bland’s advice should be dispatched via carrier pigeon. Bland shoots every pigeon he sees and will probably get it eventually.]