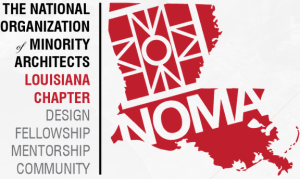 The National Organization of Minority Architects will be holding its first annual year-end retrospective this evening (Thursday, Jan. 22) at the Tulane City Center on Baronne Street. The reception will celebrate achievements in 2014 and also look forward to launching programs and events in 2015. The event is free and open to the public.

Some of the achievements NOMA Louisiana will be celebrating include: building upon the Project Pipeline Workshop series, being named the National Organization of Minority Architects Chapter of the Year, and launching its first national design competition, Between Spaces.

The event will feature a gallery display with winning entries of Between Spaces and highlights from other programs, such as Project Pipeline: Architecture + Design Camp and Workshops. There will also be a silent auction with works from local artists.

A RSVP for the event is requested here, and beverages and light appetizers will be served.