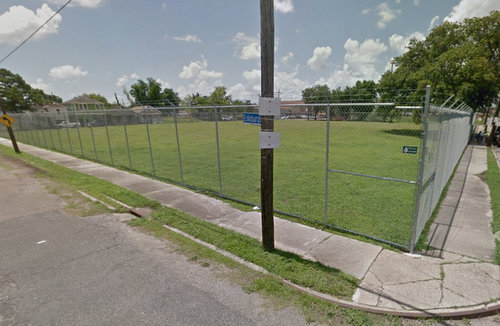 An image from Google Maps shows the large vacant lot from the corner of Broadway and Edinburgh streets. (Robert Morris, UptownMessenger.com)

The Second District station on Magazine is more than 110 years old, and has needed emergency repairs and rehabilitations with increasing frequency — often paid for by the COPS II nonprofit or even individual residents, like attorney Morris Bart. It poses logistical challenges as well, as it lacks meeting space to accommodate the district’s officers in a single room, faces the same parking congestion as other Magazine Street properties, and sits at a far corner of the district.

Mayor Mitch Landrieu said in budget meetings in 2013 that the new station would likely be in Gert Town, On Tuesday (Jan. 27), the City Planning Commission brought that promise a step closer to reality by giving quick approval to the acquisition of property at 3411 Broadway Street/7100 Edinburgh Street for the new police station and pool. The report on the project notes that having the whole square will provide ample space for all the services.

“The acquisition will also allow the construction of a new community pool, which will be made available for neighborhood residents,” according to the planning staff’s report. “The proposed uses of the site would have a positive impact on adjacent properties and the general area, serve as a deterrent to crime, and would provide valuable public services.”

NOPD Second District Commander Paul Noel has expressed his approval of a Gert Town location for the station in the past, and asked about it this week, said the Second District will miss Magazine Street, and that he wishes the historic building had room for renovation and expansion. A central location in Gert Town will benefit some command-staff officers and detectives, though it won’t have much impact on response times — most patrol officers spend their entire shifts answering calls.

“The officers go on the street and stay on the street the whole time,” Noel said. “It’s not as important for us as it is for the fire department.”

The primary benefits of the larger space for the public, Noel said, will be the easier parking, as well as opportunity for more meeting space. Currently, the Second District has to hold its weekly meetings at Children’s Hospital, and has long used Touro Infirmary for meetings with the public — though Touro is no longer even located in the Second District.

Officers will also no longer have to deal with the constant maintenance issues that have times closed the building to the public. During several weather events — even relatively minor ones, such as Hurricane Isaac — the Second District officers move their headquarters out of the station to Uptown hospitals — both for safety and accessibility.

With a larger, safer meeting space at the police station, Noel says he hopes community groups will come to the Second District.

“That’s part of what community policing is, making the police station a public facility,” Noel said.

The project has been included in the city’s Capital Improvement Plan for several years — with money allocated for property acquisition — but the planning staff report does not detail the process for acquiring it. The mayor’s office did not respond to requests for more information Friday morning.