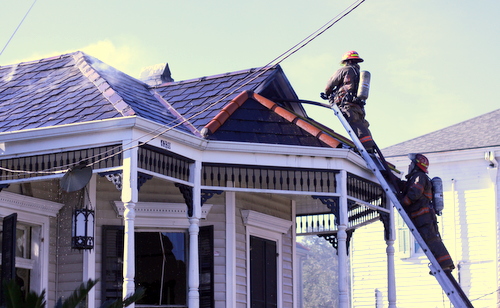 Firefighters battle a blaze in the attic of a house at 4320 Constance Street on Thursday morning. (Robert Morris, UptownMessenger.com) 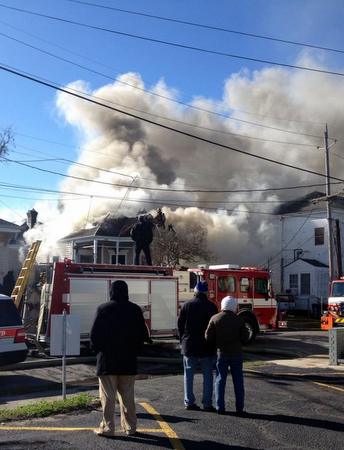 Smoke billows from a house on Constance Street as firefighters battle a blaze there. (Reader submitted photo by Louise Fenton)

A house on Constance Street that has been in the same family for a century was damaged in a fire Thursday morning, just weeks before renovations were complete and the owner had hoped to return home.

Michael Vani, a neighbor in the 4300 block of Constance, said he first smelled smoke some time around 9:30 a.m. Thursday, Jan. 8. The fire appeared to start in the attic area, he said.

“Smoke started pouring out of the side of the house,” Vani said.

The owner, Nicholas J. O’Connor Jr., said his grandfather John Martin O’Connor built the house 100 years ago. The house was currently vacant while he made some minor renovations to the floor and paint, but he had hoped to be finished and move back in before Mardi Gras, he said.

Family photos, portraits and Mardi Gras masks could be seen hanging on the walls through the broken as firefighters tried to extinguish the blaze Thursday morning. He hoped the house would be salvageable, he said, especially the ornate front.

“So much history,” O’Connor said as the firefighters worked.

Miranda Schneider, Vani’s wife, stood on their porch while the firefighters worked, her coffee mug steaming in the frigid morning’s air. Firefighters had ladders against their house as well, spraying water on both roofs.

“We were just so terrified, because our houses are so close together,” Schneider said. “God bless the New Orleans Fire Department, because they were here within seconds.”

Schneider said Schneider had been at the house every day during the renovations, and she was stricken with sympathy for his loss. Their families had lived side by side for generations, she said, as her own grandmother came out on the porch to watch the firefighters work.

“It’s heartbreaking,” Schneider said. “How do you console somebody whose lifetime of memories just went up in flames?” 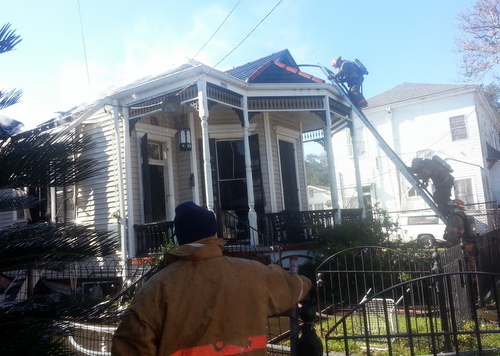