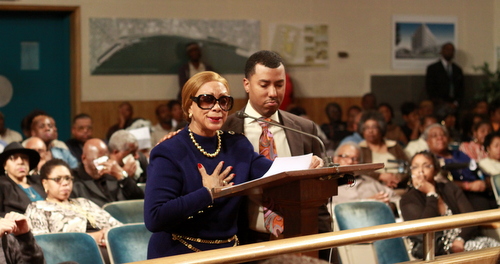 Catherine Raphael is comforted by the Rev. Jamaal Weathersby of New Hope Baptist Church as she speaks to the City Planning Commission on Tuesday. (Robert Morris, UptownMessenger.com)

A portion of two Central City streets could be renamed in honor of two prominent pastors who recently died, after positive votes Tuesday by the City Planning Commission in spite of some members’ concerns about the process for changing street names in New Orleans.

Under the proposals, requested by City Councilwoman LaToya Cantrell, LaSalle Street between Earhart and Simon Bolivar Boulevard would become Rev. John Raphael Jr. Way in honor of the police-officer-turned pastor of New Hope Baptist Church. Carondelet Street between Felicity and Martin Luther King Jr. Boulevard would become Robert C. Blakes Sr. Drive, honoring the founding pastor of New Home Ministries. Both men were known for their crusades against violence in Central City, and both died in 2013. 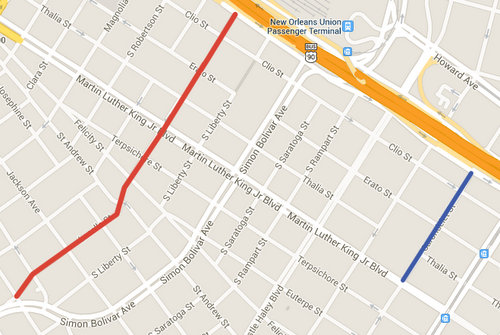 A portion of LaSalle Street (in red) would be renamed Rev. John Raphael Way, and part of Carondelet (in blue) would become Robert C. Blakes Sr. Drive, under proposals that received initial approval from the City Planning Commission on Tuesday. (map by UptownMessenger.com, via Google Maps)

The city planning staff recommended against the name changes, however, because they violate two of the commission’s criteria for evaluating new street names — streets are not to be renamed for people who have been dead for less than five years, and new street names should not break up the names of existing streets, their reports state. Finally, the criteria say that the simplest possible name should be used, so the staff said that Blakes Street and Raphael Street would be more appropriate choices if the city moves forward with the renaming, the staffers suggested. 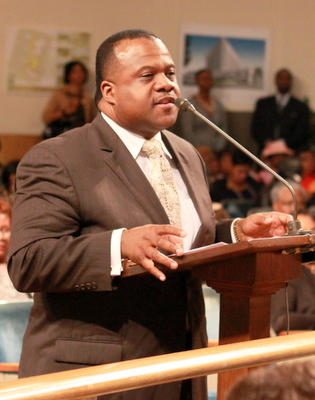 The more than 100 members of pastors’ congregations and supporters who showed up in support, however, argued that the men’s work had earned them exceptions to the rule.

Out of a former synagogue at 1616 Carondelet Street, Blakes and the New Home Ministries created a child development center, a weekly food ministry, and educational and recreational programs. Raphael spent 14 years as an officer in the New Orleans Police Department before attending seminary and becoming pastor of New Hope Baptist Church, where he was known for his vigils and fasting against violence, his walking ministry where he personally confronted young men hanging out on Central City corners, and his international mission trips.

The Rev. Moses Gordon III of Fellowship Ministry Baptist Church on LaSalle Street listed roadways around the country named for pastors, and said the city should reflect that portion of its population as well.

“It is incumbent on you that you reflect the entire spectrum of the population of New Orleans,” Gordon said, speaking on behalf of the Blakes proposal. “There are not only people here who love to party and have a good time, but there are also people of faith in this city.”

Supporters of Raphael’s said that the pastor was a personal inspiration to numerous men in Central City, turning them away from a path of violence. Sometimes, they said, Raphael’s “Thou Shalt Not Kill” signs were the beacon that turned young men away from a retaliatory shooting — and while the number of murders in the city are counted every year, it is impossible to know how many his work prevented.

“Pastor Raphael’s name was synonymous with Central City,” said Catherine Raphael, the pastor’s widow. “He brought hope to the hopeless.”

Planning Commissioners Kyle Wedberg and Alexandra Mora wondered aloud whether an honorary street name alongside the traditional names might be a solution to the impasse. Supporters of the change said that would be an insult, however, and staff members said the city lacks such a mechanism anyway.

“I think that would be a slap in the face,” said the Rev. Samuel Blakes of New Home Ministries, Robert Blakes’ youngest son.

Wedberg said he agrees that Blake and Raphael should be honored, but the city should have do so in one of two ways — either rename the entire street, or give a section of the street an honorary name. These proposals fall uncomfortably in the middle, he said, and a better process is needed moving forward.

Commissioner Nolan Marshall III said that if the rules on the books were intended to be blindly followed, then the actual people on the City Planning Commission would not be needed. Meanwhile, the renaming of schools as they are handed over to charters is tearing the city away from its own history, Marshall said, and he wants to see the City Planning Commission’s role be part of giving the people their heritage back.

“I think this is a community that has had too many defeats to have defeat at the hands of this body,” Marshall said.

The commission voted 5-3 in favor of changing Carondelet’s name, with Commissioner Jason Hughes specifying that he intended the originally requested version, Robert C. Blakes Sr. Drive. When the second vote came up, Wedberg said he felt that the first vote established precedent, and that he intended to follow it in spite of his own belief that a better process is needed. The commission then voted 7-1 to change the portion of LaSalle to Rev. John Raphael Jr. Way.

“I’m convinced in this particular case that the right result is to change the street,” said Commissioner Robert Steeg who voted in favor of both proposals. “In the long run, we need more guidance for what the city wants in these types of instances.”

Both proposals will head next to the New Orleans City Council for a final decision.