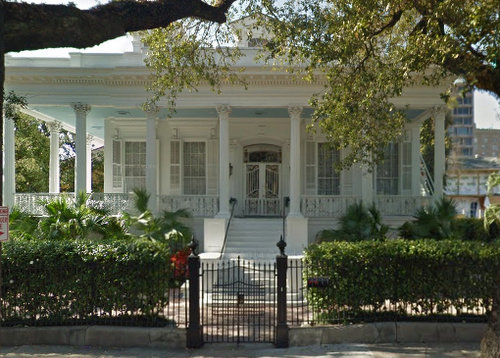 The Magnolia Mansion at 2127 Prytania Street. (via Google Maps)

A proposal to add a restaurant at the Magnolia Mansion hotel on Prytania Street drew such vehement opposition from Garden District-area neighbors on Tuesday afternoon that the City Planning Commission overruled their own staffers to recommend against the project.

Built as a private home in 1858, the Magnolia Mansion technically operates as a bed and breakfast, but owner Fouad Zeton told neighbors in December that it no longer generates enough revenue to stay in business. To help stay afloat, Zeton wants to add a restaurant inside the first floor of the building, but needs to change the property’s zoning from residential to commercial in order to do so.

In its report on the request, the city’s planning staff suggested approval of the project, primarily because it is the only property on its block of Jackson Avenue without commercial zoning. When he appeared before the City Planning Commission on Tuesday (Jan. 27), Zeton said he was thankful for the staff’s analysis, and that he had a list of signatures of neighbors and businesses in support as well.

Those neighbors who oppose him, however, do so for racial reasons, Zeton said. He has been asked, he said, if he ever plans to move back to Jamaica, or to Haiti.

“That’s direct racial discrimination to me,” Zeton said. “My neighbors have not been supportive, not because of the business, but because it’s a racial issue, nationality, religion, everything.”

The only other speaker in favor of the project was the proposed manager of the restaurant, but 22 people signed up to speak against it — including the Garden District Association, the Louise McGehee School, two Jackson Avenue condominium associations and a Catholic priest. Many said their opposition had nothing to do with anyone’s race, but the fact that the Magnolia Mansion already books events that are not allowed by their current zoning, and that he began work on the restaurant prior to receiving any city approval.

“Allowing this approval will allow him to have a reward for acting illegally and inappropriately for continuing to do work when he was told to shut down,” said Shelley Landrieu, director of the Garden District Association.

Jacob Gardner, president of the condo association at 1441 Jackson Avenue, took issue with Magnolia Mansion’s report from an informational meeting for neighbors held Dec. 8 about the project. “Once the concerns of the neighbors were addressed abut the restaurant’s parking, hours of operations, and type of crowd we would be serving, they were pleased to have a better understanding about our idea of the restaurant,” the report reads. “They welcomed us with their support.”

All of the same people at that Dec. 8 meeting were present at the City Planning Commission on Tuesday, and they remain opposed to it, Gardner said.

“That could not be anything other than a blatant misrepresentation,” Gardner said.

Commissioner Nolan Marshall III asked Zeton about that apparent discrepancy. Zeton said some people told him they were concerned only about parking, but that he had explained to them that the restaurant will have valet parking.

“You list the people who were the meeting, and then those people stand up and say they weren’t in support of you,” Marshall says.

“My secretary phrased it that way,” Zeton replied. “But we did have some support.”

Commissioner Robert Steeg offered the motion to deny the request, saying that he is concerned about the wide range of uses that will be permitted at the site if something happens to the hotel and restaurant. “Zoning is forever,” Steeg said.

Commissioner Kelly Brown said she agreed with Steeg about the need to protect the neighborhood.

The commission voted 6-2 to recommend denial of the zoning change. The request next goes to the City Council for a final decision.