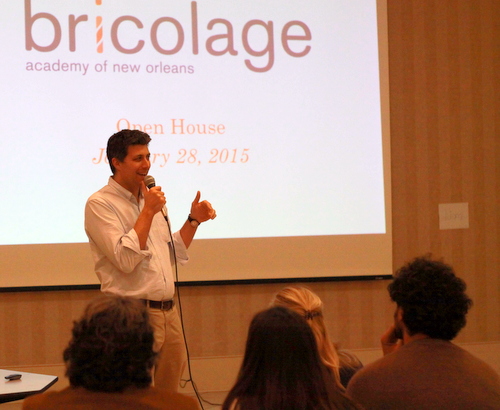 Josh Densen of Bricolage Academy speaks at an open house at the Touro Synagogue campus on Jan. 29. Bricolage is moving out of Touro this year, and Cypress Academy is moving in. (Robert Morris, UptownMessenger.com)

Bricolage Academy, an Orleans Parish charter school that opened two years ago, will move out of Touro Synagogue on St. Charles Avenue next year and into Mid-City, while Cypress Academy — one of the newest OPSB charter schools — will open next year in the Touro space.

Cypress Academy’s charter application was approved by the Orleans Parish School Board last summer, and will open with a class of 100 kindergarten students in this fall in the classroom area at Touro Synagogue at 4238 St. Charles Avenue.

The school will focus on the same foundational skills and academics as other schools, but it will also add two unique component, said Bob Berk, Cypress Academy Head of Schools. One is that part of the school day, starting with kindergarten, will be focused on problem-based learning, developing critical-thinking and problem-solving skills to apply academic concepts to real-world problems.

A good example of problem-based learning for students in New Orleans, Berk said, might be the city’s street flooding woes. While an eighth-grade science project might be a traditional way to tackle that problem, there are aspects of it that kindergarten students can also begin thinking about.

“They can do their own research and come up with solutions using what they’ve learned in language-arts class, math class, science class, even history, and incorporate all those skills to solve a real-world problem,” Berk said.

The other unique aspect of the school is that it reserves 20 percent of its incoming class for students at risk for reading disabilities, such as dyslexia. Cypress Academy will provide a proactive early intervention program for those students, based on consistent research that shows better outcomes for students who receive an earlier start to those services.

“If we can identify these kids early, let’s serve them even before federal law mandates these services,” Berk said.

Cypress will follow other new charters such as ENCORE Academy and Bricolage Academy who have gotten their start in its spaces before moving on to larger campuses. Likewise, Berk said he expects Cypress Academy to spend about two years at Touro looking for the school’s next location.

Cypress Academy will hold an open house for interested parents at 6:30 p.m. Tuesday, Feb. 3, at Touro.

Meanwhile, Bricolage will start its third year this fall in the Our Lady of the Rosary campus, a former Catholic school on Esplanade Avenue in Bayou St. John. Its history as a school stretches back decades, but it most recently housed Morris Jeff Community School, until that charter moved into its permanent building on South Lopez Street over winter break.

The Our Lady of the Rosary campus has much more space than Touro did — enough room for up to 500 students, said school leader Josh Densen.

Bricolage currently enrolls 150 students, four sections each of kindergarten and first grade, with roughly 20 kids per classroom now (though Densen expects that to eventually consolidate those into three sections of 25 students each). Next year it will add a second grade as it grows, year-by-year into a kindergarten through eighth grade school,

Bricolage has received 220 applications for next year’s kindergarten class so far. The school plans to admit 100, and hope to retain around 80 after some of those admitted choose to attend to schools that are not in the OneApp system instead. Bricolage also expects to have about 10 openings in each of the first and second grades next year, Densen said.

Meanwhile, Bricolage is also one of a half-dozen applicants for the John McDonogh school building, and Densen said he believes the school’s application is “competitive.” If it is approved, the renovation would still take three years, meaning that Bricolage would not move in until 2018 — but Densen said he expects a decision to be made soon.

“I would love to move to John Mac,” Densen said. “You’ll know in a week or two if that happens.”

The OneApp system divides the city into six large “catchment areas,” and Bricolage will give preference for half of its seats to those students in its new Catchment Area 3 — which includes the Treme, Seventh Ward and Gert Town through the Fairgrounds, Mid-City and Lakeview.