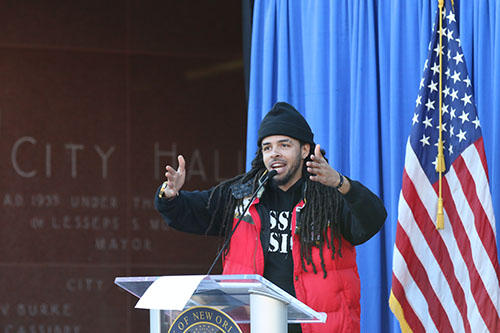 Art that expresses the African-American experience — from spirituals more than a century old to a new graffiti exhibit that closes today — has a power across generations to both create change and inspire the young, artists and officials said Monday morning in New Orleans in celebration of Martin Luther King Jr. Day.

“We are the generation of messengers,” said rapper Dee-1, Ben Franklin High School graduate David Augustine Jr. “We all have a platform, we all have an audience, we all have a flock we’ve been entrusted with. We have to decide, what is our message?”

The ceremony on the steps of City Hall was led primarily not by the veterans of New Orleans’ civil rights movement — many of whom famously worked right alongside Dr. King — but was given over to the city’s young black artists. Augustine’s keynote address was introduced by #ProjectBe grafitti artist Brandan “BMike” Odums, while musical performances included trumpeter Troy Sawyer’s rendition of “Lift Every Voice and Sing” (written in 1899) and songbird Robin Barnes’ take on Louis Armstrong’s “What a Wonderful World.”

When he was a child, Odums said, he didn’t understand the significance of celebrating King’s life, because it seemed so long ago. As he became an artist, however, he became particularly inspired by King’s words that, “Almost always, the creative dedicated minority has made the world a better place.”

Everyone, Odums said, has the responsibility to use their talents for good.

Augustine began his remarks by thanking Mayor Landrieu for having the courage to let a rapper give the keynote speech.

“This definitely sends a message to my generation that you have faith in us and you believe in us,” Augustine said. “For all the youngsters out here, we making moves, y’all. This is our world, and we have to decide where to take it.”

Augustine named Eric Garner and Mike Brown — whose deaths at the hands of police officers in Ferguson, Mo., and New York City have sparked protests around the country — as well as Carl LeBlanc and Ryan Morgan, two of his own friends who were gunned down here in New Orleans.

Both the problems of police violence and those of street killings may seem remote to some people, Augustine said, but in reality both their causes and their effects affect everyone. “Injustice anywhere is a threat to justice everywhere,” he said, quoting King.

“We should learn from his nonviolent approach to solving problems. I’m speaking to my generation right now. This is the era of, ‘Step on my shoes, and I’m ready to fight. If we fight and I lose the fight, I’m going to get a gun.’ It’s time to end that, y’all,” Augustine said. “It takes self-control, it takes humility, and it takes discipline to practice nonviolence.”

King had his flaws, Augustine said, but we hold him up as an example because he committed his life to a greater cause. Merely chasing the wealth or fame or sex that the world celebrates will lead only to emptiness, Augustine said.

“If you live your life and die and never stand for something greater than yourself, I’m sorry to say, but you’ve wasted your life,” Augustine said.

Augustine exhorted young people to live according to their own paths, not to emulate what they see on TV. He encouraged parents to stay together to raise their children, and he urged all adults to remember that they are all role models, even and especially if they are basketball players or rappers. And New Orleanians, he said, should all come together to solve the city’s problems.

Mayor Mitch Landrieu, in his comments, contrasted both the racial strife over police violence across the country and the high rates of violence in New Orleans against the positive messages on display by the artists at Monday’s celebration.

“Just like 50 years ago — when 20-somethings like Dr. King and John Lewis led the struggle — conscientious leaders of the day like Dee-1 and BMike are picking up the mantle of leadership,” Landrieu said. “They’re showing us the enduring and galvanizing power of art and music and how a brave new world of instant communication can help us address some of our age-old problems.”

Echoing Augustine, Landrieu also paid tribute to the deaths of Garner and Brown and Trayvon Martin, as well as to the 150 murder victims in New Orleans last year. To that litany, he added the death of NOPD Officer Rodney Thomas — and though different circumstances led to each of those deaths, he said he sees the same pain in the eyes of all those families.

“Each is left with an empty spot at the family table, gone but not forgotten,” Landrieu said. “We can all understand this pain. It’s our shared humanity, the tie that binds us together. … All lives matter, from the riots in Ferguson to the shootings of police officers and the daily death and destruction on our streets.”

Just as no citizen should be prejudged by the color of his or her skin, Landrieu said, none of the city’s hardworking police officers should be condemned because of the unethical actions of other members of the profession. As in the days when Martin Luther King was forming the Southern Christian Leadership Conference in New Orleans, the path forward comes from people of all walks uniting over shared goals in the name of progress. 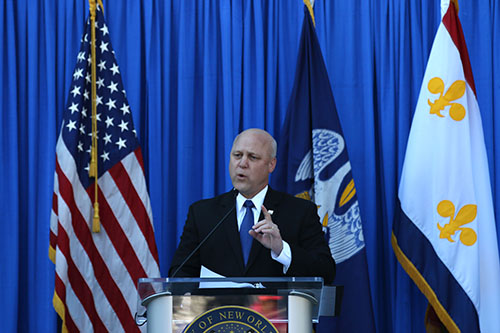 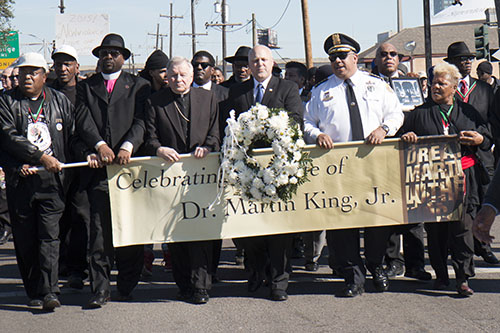 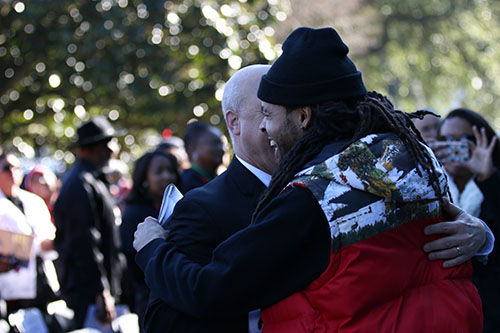 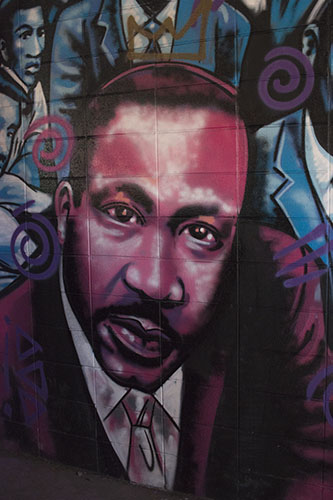 A painting of Dr. Martin Luther King from the #ExhibitBe installation on the Westbank. One of the founder of the project, Brandan “BMike” Odums, also spoke at Monday’s commemoration. (Zach Brien, UptownMessenger.com)