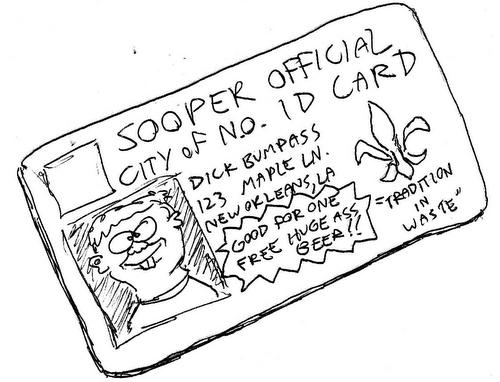 Councilwoman Latoya Cantrell is set to preview the next installment in her cavalcade of “progressive” policies enacted by other cities. This past week, she announced her intention to introduce a non-binding “Welcoming Resolution” early next year that will include a laundry list of policies proposed by immigrant rights groups.

Don’t get me wrong – some of the policies being suggested are perfectly reasonable. I can hardly dispute the need for multi-language signs and forms at City Hall, or for hiring more Spanish-speakers in the NOPD and in government offices.  We’re relatively close to the Mexican border, and we do need to accommodate the needs of Spanish-speakers.

However, Cantrell’s brief tenure thus far has shown that she has never been one to stop with reasonable policies.  Thus, she also announced that she wants to create a system of municipal identification cards, ostensibly so that illegal immigrants can have photographic identification and proof of residence.

This would be of no benefit to citizens and foreign nationals legally residing in New Orleans, of course, since they would be able to obtain a state-issued ID with relative ease.  However, it would also be superfluous for virtually all illegal immigrants, since they can obtain adequate identification from the country where they are a citizen.

In the case of Mexico, the Mexican government freely issues the Matrícula Consular de Alta Seguridad, a counselor identification card (CID) through its consulates, including one here in New Orleans.  Mexican CID cards have been criticized in some quarters as being subject to fraud due to on-site verification of some supporting documents, but they are still generally-accepted as proof of both identity and residency.  Some banks even accept CID cards for the purpose of opening an account.

Given the prevalence of CID cards and the convenient presence of a Mexican Consulate in New Orleans for their issue, there is simply no need whatsoever for municipal ID cards. The only purpose municipal IDs serve is to provide an ID issued by an American political subdivision, but that’s useless posturing.  It doesn’t afford any additional legal status.

At best municipal IDs merely obfuscate immigration status, and unless there’s a pressing reason for legal residents to obtain one, they can’t even serve that purpose.

If a person is in the country illegally, the City of New Orleans can’t change that by issuing them a plastic card with their name, address, photograph, and (I’m supposing) a cheap graphic of a fleur-de-lis.  The only thing the City of New Orleans can realistically accomplish through a municipal ID is to thumb its nose at federal immigration policy (and there are cheaper and smarter ways of doing that).

So why is Cantrell pushing for municipal IDs?  Put glibly, it’s the flavor of the month in progressive policy circles.

The drive for municipal ID cards started in New Haven, Connecticut in 2007.  This was followed in 2009 by the SF City ID Card.  Since that time, municipal IDs have spread to other cities in California and the northeast.  They were just enacted this year in New York City, and now it seems like every day another local official vying for applause from immigrant rights groups is proposing one.

Since the cards are abjectly redundant, some cities have attempted to make them worthwhile by bundling them with additional benefits.  Oakland and Richmond made their municipal IDs into prepaid debit cards, thus allowing illegal immigrants the privilege of being ripped off by the fees charged by large banks.  New York, on the other hand, negotiated a deal to where the municipal ID cards would provide a one-year free membership at 33 major cultural institutions.

Of course, it doesn’t change the bottom line.  These benefits could have been provided to residents without creating a municipal ID card program.

Rather, the bundling of additional uses or benefits is merely a scheme to give legal residents some reason to obtain a municipal ID, providing the program with a false veneer of credibility.  In the words of David Marcus, writing for the National Review, New York’s gambit of providing free memberships amounts to “inventing a reason for citizens to get an ID whose only purpose is to obscure the line between legal and illegal residents.”

Obscuring immigration status is a dubious aim to begin with, and frankly, municipal ID cards are unlikely to fool anyone.  In the end, those who reside in New Orleans legally will continue using state-issued IDs.  Illegal immigrants might be persuaded to obtain a municipal ID card, but they won’t really receive any significant benefit from one over a CID card.  The only clear winners are advocacy groups who claim what amounts to a symbolic victory.

My disappointment with Cantrell continues to grow.  This is not merely a bad policy to be proposing, it’s a stupid one.  It’s the type of nonsense indulged by people with ulterior motives who don’t really care about wasted time and expense so long as they get to make their point.