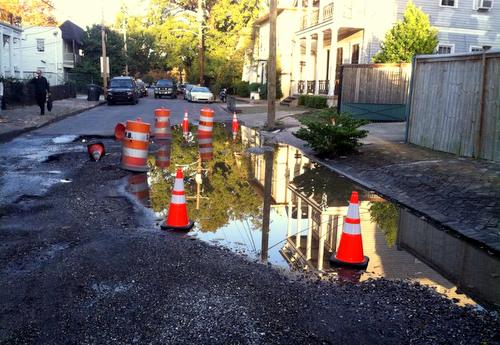 Procrastinating until something becomes absolutely critical is undeniably an American tradition.  And when it comes to procrastinating, New Orleans is always at the forefront.

There’s an example of this phenomenon just down the street and around the corner from my house.  In the 2000 block of Coliseum Street there has long been a broken water or drainage line (it’s unclear which).  It first became obvious over seven years ago when the street began to sink and the adjacent brick sidewalk began to break apart.

The city responded as you might imagine – it slapped on additional asphalt and declared, presumably in a Russian accent with apathetic monotone, “good enough for government work.”  An image from Google Maps from August 2007 confirms the sad, pathetic repair.

Naturally, the problem only became progressively worse.  Every time it rained, water would pool for weeks in the sunken portion of the street before finally evaporating (a rare occurrence).  Not only was this bad for vehicles and passing pedestrians, it couldn’t have been great for the condition of the already-deteriorating pavement either.

A few weeks ago, something finally gave.  Instead of just dipping, the pavement began to break apart and left large holes.  At least that appeared to be the case, because at the same time the Sewerage and Water Board left large orange cones around the site.  No repair was forthcoming, but for a while, a small section of intact pavement remained on one side that allowed traffic to pass.

This state of affairs went on until this past week, when the crumbling of the remaining pavement began creeping further down the other side of the street.  Nobody from the city came to set down a metal plate or put gravel in the holes.  Accordingly, cars started being forced to hop the sidewalk or simply turn around.

One day I arrived to find a small white hatchback stranded in the middle of the hole.  To my dismay, it has become treacherous enough to disable a car.  And this situation remains.

In many cities, this would be a shocking state of affairs.  In New Orleans, I’m willing to bet that this story struck many readers as so pedestrian, so pitifully common, that they stopped reading after a few paragraphs.  We’re inured to this sort of thing; it’s outsiders that are shocked.  “What is Owen, some kinda tourist?”

At the same time, I am shocked how we’re so blasé about the city’s neglect of its basic obligations, while at the same time blithely accepting the city’s excesses in regulating the property and behavior of its own citizens.

Two weeks ago, the New Orleans Fringe Festival was forced to cancel its Wednesday and Thursday shows (including opening night) because a special use permit for the event was denied by the city, which escalated the dispute to the point of filing for injunctive relief in Civil District Court.  Apparently certain code issues raised by the Fire Marshal were the nexus of the fracas.

The city’s issues with the Marginy Opera House may well have been legitimate, but it’s the speed and alacrity with which they shut the venue down which is truly impressive.  We can conclude that when somebody else’s property is deemed to be unsafe, the full weight of the city may be brought to bear.  They won’t mince words or waste time.

On the other hand, when the city’s own property (which includes our streets) becomes downright hazardous, you can absolutely hear those crickets chirping.  Had the city not ignored a burgeoning sinkhole on Coliseum Street for more than seven years, I doubt I would have been blocked by a stranded car, and a local thoroughfare would not be impassable.

Of course, when you ask the Landrieu Administration about our crumbling streets, the common refrain is “there is no money.” Oh, there’s money to enforce a Byzantine permitting system and money to file last-minute lawsuits in Civil District Court, but sorry, dear citizen, there’s simply no money to fix a pipe and fill a damned hole in a reasonable time.

The issues with infrastructure in New Orleans no longer concern whether every street and sidewalk will be perfectly paved or every storm drain will be clear and functional.  It’s much more basic than that.  The issue is whether the city is even going to bother limping along our infrastructure and keeping it generally functional, or whether it will allow it to fail completely until a more comprehensive rebuilding scheme comes along.

The position seems to be that the city can procrastinate until it has the money to fix everything, and until then, it will avoid fixing anything.  That’s the motto of the procrastinator.  It could just as easily be the motto of our current leadership.

56 thoughts on “Owen Courreges: Cracking down on the opera house while Coliseum crumbles”