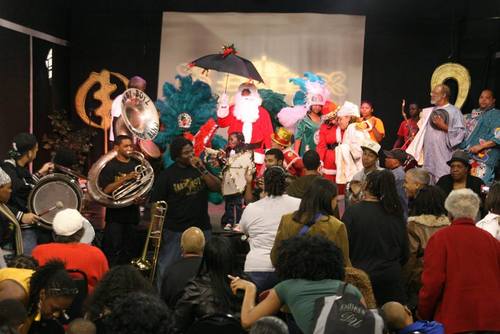 This weekend, O.C. Haley Boulevard will hold its annual holiday celebration with a mix of musical performances, dancers, spoken-word artists, a Kwanzaa production and a gift marketplace.

(NEW ORLEANS, LA)  For the fifteenth consecutive year, music and merriment are the order of the day as Ashé Cultural Arts Center lights up the boulevard with musicians, merchants, authors, spoken word artists, and the community, creating an astonishing holiday family festival and marketplace in Central City New Orleans.  Located in the Cultural District at 1724 Oretha Castle Haley Boulevard in New Orleans, the festival brings together a hefty mix of jazz, hip-hop, r&b, sprinkled with spoken word and incredible young dancers.

On Friday, December 12, Holiday on the Boulevard kicks off with the annual Kwanzaa Demonstration, led by Drena the Dreamer (Drena Clay).  Youngsters learn about the principles of Kwanzaa, the meaning behind its terminology and the significance of the lighting of the Kinara.  Afterwards, at the Imagination Tour, participating children travel the continent of Africa.  Some are dressed in African attire and become dancers led by Mama Jamilah, while others take to the drums to play rhythms taught by master drummer Luther Gray of Bamboula 2000.  That afternoon, the community is invited to learn more about Ashé and its programming at the annual Luncheon and Open House.  Following the luncheon, attendees are invited to tour Ashé’s newest acquisition, the Ashé Powerhouse, located on Baronne Street at Polymnia Street, just around the corner from the main building.

Then, on Saturday, December 13, festival goers should expect great one-of-a-kind gift items from the array of talented vendors at the holiday marketplace. Meanwhile, fashionistas will be all eyes when the models hit the runway for Diaspora Boutique’s Fashion Show.   Then the thrilling upbeat sounds and moves of the Dale Baxter band will get the place rocking, and the down home blues delights of Lloyd Daly and the Daly Tymes will punctuate the afternoon.  Never to disappoint, closing out the festival is the incredible Bamboula 2000, featuring the Bamboula dancers.  The weekend also promises other surprises, including guest spoken word artists, a performance by featured dance artist J. C. Styles, and an appearance by the winners of the 2014 Central City Festival Dance Contest.

Attendees should don their dancing shoes, because the magical music just makes you want to move. All entertainment is indoors, free, and open to the public.

Those interested in vending opportunities should contact Luther Gray at (504) 495-0463.  Individuals who want to help out by volunteering should call Gwendolyn Richardson at (504) 569-9070.