A rendering by Studio WTA architects of the redevelopment planned for the corner of Nashville and Magazine. (via nola.gov) 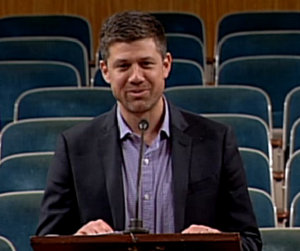 Restaurateur Sean Josephs speaks to the City Planning Commission on Dec. 9, 2014. (via nolacitycouncil.com)

The new venture at the corner of Magazine Street and Nashville Avenue planned by a husband-and-wife team of celebrated New York City restaurateurs received high marks from the City Planning Commission, sending it to the City Council with a positive recommendation.

Sean Josephs and Mani Dawes are planning a restaurant with a baked-goods breakfast selection, a casual lunch, oysters in the afternoon and casual fine dining for dinner, with a menu designed in part to complement the bourbon selection that is a mainstay of Joseph’s other restaurants. He owns Char No. 4 in Brooklyn and Manhattan’s Maysville, while Dawes is the owner of Tía Pol, a tapas restaurant in Manhattan.

In a meeting with neighbors in September, the couple emphasized their desire for a “neighborhood” restaurant. Dawes is from New Orleans and her mother lives a block from the proposed restaurant, and the couple themselves and their child have also moved two blocks away, they said.

The Audubon Riverside Neighborhood Association has reached a good-neighbor agreement with the couple, and has no opposition to its opening, said association president Sharon L’Hoste at the Dec. 9 hearing before the City Planning Commission.

“The neighborhood is generally in favor of the opening of this particular establishment,” L’Hoste said, but that support is based on the conditions in the agreement.

The restaurant is fully on board with conditions in the the good-neighbor agreement, Josephs told the commission.

The hearing only drew a single person in opposition, but that person was no longer present when the restaurant appeared three hours into the meeting.

Commissioner Robert Steeg said that the good-neighbor agreement is between the restaurant and the neighborhood and makes him more willing to support the proposal, but that it was not customary for the City Planning Commission to include those documents in their motions. Instead, the commission will approve important conditions individually, Steeg said.

Among the 15 individual conditions proposed by the city planning staff, the restaurant must close by 10 p.m. on weeknights and midnight Fridays and Saturdays, limit the bar area to 15 percent of the floor space, keep the outdoor seating off the public property and enact a litter plan.

Steeg’s motion in favor of the proposal and those conditions passed 7-0, sending it to the City Council for final approval.