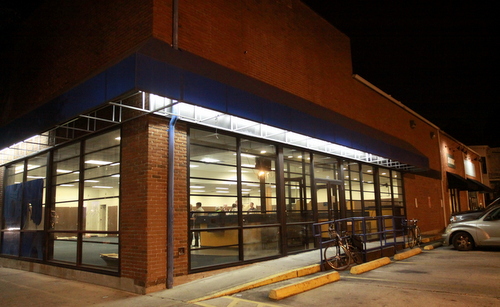 Neighbors speak with developers inside the former Blockbuster at Magazine and Louisiana, which is slated to be renovated into a CVS pharmacy. (Robert Morris, UptownMessenger.com) 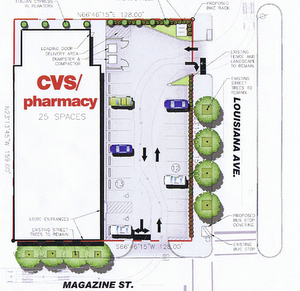 A site map of the proposed CVS at Magazine and Louisiana presented by developers on Tuesday. (design by Linfield, Hunter and Junius architects)

Magazine Street touts itself as “one of New Orleans’ premier shopping and entertainment districts,” so when developers presented a plan this week to convert a vacant Blockbuster Video at the edge of the Garden District into a new CVS pharmacy, they can hardly have been surprised by the lackluster reaction from residents.

“We don’t need another store to go buy gum and beer,” said Constance Street resident Mindy Decker, noting that another Walgreens is already a few blocks away and suggesting CVS consider Tchoupitoulas instead.

The corner building at Louisiana Avenue and Magazine Street has sat largely vacant since the recent wave of Blockbuster Video closings, though the Subway sandwich shop and Green Tea Chinese Restaurant remain open on the Louisiana Avenue side of the building. Now, CVS hopes to buy the building, renovate it completely, and use the entire space for a pharmacy, said land-use attorney Michael Sherman in a meeting with neighbors Tuesday evening.

Although the corporation had wanted a 24-hour location at the business, Sherman said the development team felt sure that wouldn’t fly with the Garden District neighbors, so they have already scaled back the proposed hours to 8 a.m. to 10 p.m. CVS does plan to sell alcohol, Sherman said, which will require a conditional use permit from the City Council — as does the larger square footage once the store is consolidated.

“We need lots of feedback,” Sherman said. “The application has not even been filed with the city yet.”

The plan, while not especially popular, essentially returns the building to its original use, Sherman said, as it was built for an old Eckerd’s Drug Store. But the building needs serious updating, such as a pedestrian entrance on the Magazine Street side, away from the parking lot. The developers presented a draft of some architectural ideas they have collected, but Sherman said he expects it to be heavily revised based on neighbors’ feedback — mentioning several times the numerous revisions that went into the design of a Walgreens on the upper end of Magazine past Jefferson.

“The major construction is going to be trying to improve the look of the facade,” Sherman said. “What’s clear from tonight is we really have more to do.”

For many residents, the sale of alcohol presented a major problem. Sherman said the store would not sell any alcohol as singles for individual consumption, but neighbors said that the Walgreens down the street has thrived despite an agreement not to sell alcohol. If the CVS receives permission to sell alcohol, they said, the Walgreens will likely feel compelled to follow suit.

James Smoak of the Touro-Bouligny Neighborhood Association told the developers he doubts his group will agree to support any plan that includes alcohol sales.

Most of neighbors’ other concerns, such as hours, lighting and litter, Sherman said, can be addressed in a good-neighbor agreement.

“The toughest thing right now — and y’all have been loud and clear — is that you don’t want any alcohol,” Sherman said. “We’re going to discuss that back and forth. But to the extent that it’s ‘zero alcohol’ and not negotiable, there may be an impasse.”

Shelley Landrieu of the Garden District Association said she did not know how her board would vote on the proposal, but they also would clearly prefer a plan like the Walgreens that did not include alcohol sales. In fact, something local would have been far better than a CVS, Landrieu said, but the association is unlikely to try to stop a private property owner from developing their business — the association is grateful that the developers were at least sharing information in advance.

“This would not have been our first choice of what goes there,” Landrieu said. “But you manage the best that you can do. Hopefully we can come up with a better project from where it started.”

In the business next door, Green Tea owner Yung Lau said he will find a new location if the development displaces his restaurant, but he doubts the CVS will ultimately go through. New Orleans prefers local businesses too strongly, he said.

“The whole street will all be pharmacies. What’s the point?” Lau said. “It’s better to have a local store. If it’s all franchises, you’re not doing any good for the neighborhood.”

The proposal must be heard first by the City Planning Commission, and then by the City Council. No dates for those hearings have been set.

An early rendering of the CVS proposed for Magazine and Louisiana, though developers said the expect significant revisions based on neighbors’ feedback. (design by Linfield, Hunter and Junius architects)