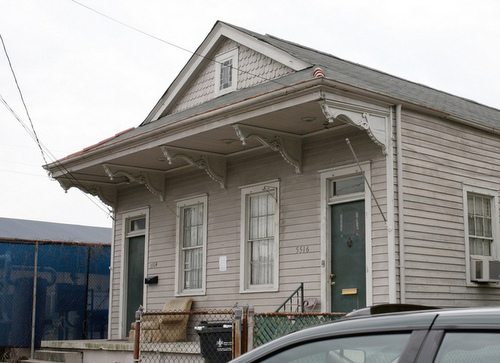 The house at 5514-16 Tchoupitoulas was one of three that Uptown Car Wash sought to demolish last week. (photographed in 2012 by Preservation Resource Center)

For the second time in two years, the New Orleans City Council denied a request to tear down three homes in front of a car wash on the upper end of Tchoupitoulas last week.

The three houses are at 5514-16, 5518-20 and 5522-24 Tchoupitoulas, and City Councilwoman Susan Guidry described them as two Victorian double shotgun houses and a Creole cottage.

“The business wants to be more visible from the street, but to me this is just not a sufficient reason to lose more of our historic housing stock,” Guidry said.

The Uptown Car Wash had previously sought to demolish the houses in 2012, offering a plan to redevelop the parcels into new businesses. That request was rejected, amid opposition from the Preservation Resource Center and the Louisiana Landmark Society.

The business returned with a simpler request to remove them altogether before the newly reconvened Neighborhood Conservation District Advisory Committee on Nov. 17. Nothing is wrong with the houses, a representative of the business told the NCDAC, but new car washes have recently opened and Uptown Car Wash hopes to attract more customers without the houses in its way.

The NCDC recommended denial of the request in November, and the City Council likewise voted 7-0 on Thursday to uphold that decision. Afteward, Guidry said she wanted to “thank my colleagues for helping save these typical New Orleans stock — cute houses.”