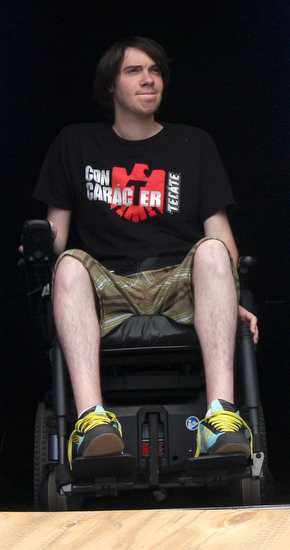 Jonah Bascle, the 28-year-old local comedian ran for mayor as a platform to bring attention to New Orleans’ lack of accessibility for the disabled, died Tuesday morning of complications relating to muscular dystrophy — but friends and supporters vowed to ensure both his love of good humor and his activism to improve the city live on.

Bascle was diagnosed with muscular dystrophy — which causes the progressive deterioration of the muscles — when he was a young teen. Yvonne Landry, owner of the La Nuit nightclub on Freret Street, said she first met Bascle when he signed up for improvisational comedy classes from her at age 19, shortly after he had first been confined to a wheelchair.

After getting to know the young comic, Landry said she vowed that he would always have a place to perform on her stage. In fact, the club kept a special ramp on hand so that he could maneuver his wheelchair to the microphone. It became a sort of home base for him, she said, close to his own house and always accessible.

“He was a bad-ass,” Landry said. “He just knew no limitations. He was always writing, he was always funny, his wheels were always turning –- meaning the wheels in his head, no pun intended.”

Getting around New Orleans is not easy for anyone, but can be nigh impossible to people in a wheelchair. Businesses otherwise open to the public can be difficult to enter in a wheelchair, while public and even for-hire transportation can be strongly inaccessible.

In 2010, Bascle elevated those concerns into a run for mayor, drawing attention with a protest that briefly halted streetcar service one day shortly before the election. After the election, Bascle continued his effort for what he saw as a simple solution — adding a handful of trips by the red, wheelchair-accessible Canal streetcars to the historic St. Charles line, in addition to the older, inaccessible green models. He also launched a campaign to build handicapped ramps for businesses he had a hard time entering, and providing a dozen or more to establishments around the city.

“One of the big things that he’s done is brought light to something most people take for granted, their own mobility and ability to get around the city,” said Byron Raila, a close friend and the campaign manager for Bascle’s 2010 mayoral run. Bascle’s efforts benefited not only those in wheelchairs, but also the elderly, Raila noted. “For the large majority of population, this isn’t something they can consider unless they have a loved one who is mobility impaired.”

Meanwhile, Bascle also continued pursuing his comedy career, opening for some of the biggest acts to come through La Nuit, competing in a national ComedySportz championship and studying in a several-month stint in Los Angeles with top names in the comedy industry. Bascle’s performances combined his own determination and humor, with self-deprecating references to his life in a wheelchair that not only pushed listeners’ boundaries but also opened their minds.

“The jester can always tell the truth, as long as he makes the king laugh,” Raila said, recalling how Bascle’s routine would sometimes surprise his audiences. “People were too polite. They didn’t want to laugh at the absurdity.”

Bascle also befriended Hannah Engelson, a documentary filmmaker who went from helping produce some of his comedy videos to deciding he was strong subject matter for a documentary, which she tentatively titled “Jonah Stands Up.” She raised nearly $10,000 in an online Kickstarter campaign, and began filming Bascle five days a week in September.

“Jonah was full of life. He was always doing things,” Engelson said. “Every time I talked to him, he would have this new idea, this new creative thing he wanted to do. He always wanted to make things or create things or do something funny or silly. … That’s the stuff I was filming. He was full of ideas, full of things to do, full of things to create.”

Bascle was still performing as recently as October, but his health suddenly took a downward turn over the last six weeks, sending him in and out of the hospital with complications relating to cardiomyopathy, a heart condition that commonly accompanies muscular dystrophy. On Tuesday morning, Dec. 2 — despite a persistent show of strength and humor until the end — Bascle died.

“He didn’t like people being sad,” said Raila, who returned to New Orleans from his new home in Chicago over Thanksgiving to be with Bascle. “Honestly, he was joking even while we were in the hospital, which is unbelievable to me. He was literally still making jokes.”

In the hospital, Bascle was visited by City Councilwoman Susan Guidry, whom he had briefly considered running against in the 2014 City Council election. By his bedside, Guidry read a proclamation from the City Council commending Bascle’s efforts on behalf of the city — and he received similar commendations from Mayor Landrieu’s office and Congressman Cedric Richmond.

Guidry vowed to continue Bascle’s fight, and friends said Bascle would have wanted all his supporters to do so. Those moved by his life and death, they said, should use the opportunity to call the mayor’s office or the RTA Board of Commissioners to express the need for more accessibility in public transportation.

“We’re having to carry on that fight,” Raila said. “He died, and the St. Charles Avenue streetcar line is still not wheelchair accessible.”

Likewise, Engelson said her work on the documentary will continue. She had planned to spend the rest of the year filming Bascle, but instead will devote the time to completing an animated sequence the two of them had planned to depict his hospital stay at age 19 when he was diagnosed with cardiomyopathy. She has already begun editing the other footage, she said.

“It’s still going to be made,” Engelson said. “The footage I captured is different than what I initially expected, but it doesn’t change the fact that he was still full of life. We knew it was a possibility, but you don’t expect these things to happen until they’re happening.”

Friends and supporters are also planning a secondline and memorial. Details are still being worked out, but one suggestion Bascle had before his death was a comedic “roast” — an event that usually involves good-natured mockery of the subject, a sort of satire of a more traditional toast that revels in absurdity.

If that’s what Bascle’s family decides on, Landry said, the comedy club will certainly oblige.

“The last thing I want to do is make fun of my friend who died too young,” Landry said. “But if that’s what he wanted, that’s what we’re going to do. I know Jonah, and I’m sure he wanted people having joy over him.”