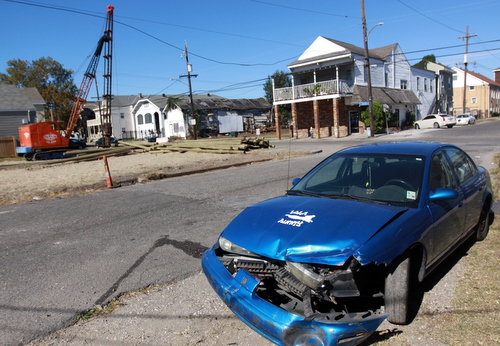 A damaged blue Saturn sits in the 2000 block of Foucher, after a fatally wounded woman was found in a Mercedes that crashed into it. (Robert Morris, UptownMessenger.com) 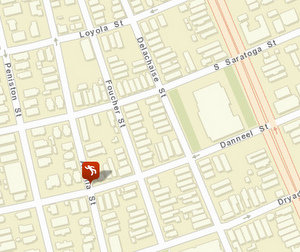 Friday morning’s fatal shooting in the 2000 block of Foucher has yet to be loaded into the NOPD crime maps, but a homicide marker shows where a victim was found a block away in September. (map via NOPD)

One of Uptown New Orleans’ most persistently violent intersections — Foucher Street near South Saratoga — was the site of another homicide investigation overnight after a woman was found fatally shot inside a Mercedes sedan that crashed there, authorities said Friday morning.

Police were summoned to a traffic crash around 3 a.m. Friday, Nov. 7, in the 2000 block of Foucher, and arrived to find a woman in the front seat of a silver Mercedes sedan that had crashed into a parked blue Saturn, according to NOPD news release. She had been shot several times, and died after being taken to the hospital, the release states.

Further information about the shooting was not immediately available. Anyone with information is urged to call CrimeStoppers at 822-1111.

Friday’s shooting marks the third fatal shooting near the intersection, following a gun battle in March that killed two women and a shooting in September killed another man who staggered through the intersection before dying a block away. Neighbors have begged police for deeper investigations into the activity underlying the violence, and have also tried to make their own inroads into the block — offering to install anti-crime cameras for residents and trying to pressure derelict property owners to clean up their lots or sell them.

A resident of the block said Friday morning she was awakened by the sound of the crash, and she was upset by how long Friday’s shooting victim was left in the car before being taken to the hospital — as well as by the ongoing pattern of fatal shootings nearby.

“There will probably be more,” she said.

2 thoughts on “Woman killed in third fatal shooting of the year near Foucher and Saratoga, police say”