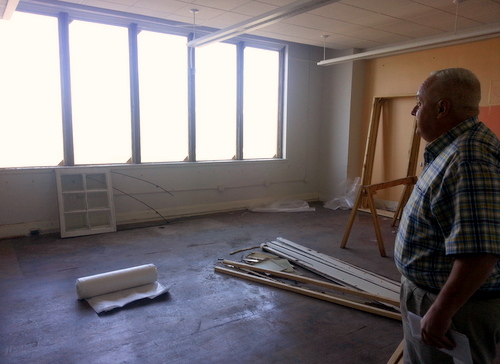 With the major U.S. midterm elections now in the rearview mirror, school officials around New Orleans are now looking to the Dec. 6 runoff.

While Louisiana decides between Bill Cassidy and Mary Landrieu for U.S. Senator, New Orleans voters will also decide whether to renew a property tax that will begin building a citywide fund to maintain school buildings in Orleans Parish — which some school leaders say is crucial to ending the decades-long cycle of neglect and deterioration at city school buildings.

Many schools around the city are still in the middle of spending millions of dollars of renovations, using FEMA money received after Hurricane Katrina to bring old campuses to a standard of “warm, safe and dry” and in the process addressing maintenance issues that have been deferred for years, such as the roofs and heating-and-air systems.

The Orleans Parish School Board has long been without a dedicated way to pay for these major repairs, resulting in further deterioration to the buildings and an ever-growing pile of emergency projects to pay for, said Ken Ducote, a facilities consultant for the Eastbank Collaborative of Charter Schools.

“We need to preserve these buildings so that we don’t get back to the situations we had in the past,” Ducote said in a recent presentation at Lusher Charter School, where both the Freret and Willow Street campuses are receiving the work.

This year, however, a series of school-construction bonds created in 1995 are set to begin expiring, so the Orleans Parish School Board has proposed taking the tax money that had previously been used to pay those loans off and re-dedicating it into a permanent campus-repair fund. As the bonds are paid off, the 4.97-mill property tax would remain the same, and the freed-up money would begin building a fund tied to repairs at each school building, ultimately raising $13 million per year, Ducote explained.

The fund will directly benefit individual schools, Ducote said, because it will earmark a certain percentage of the money raised to each campus based on its student population. At Lusher, for example, because the money will be tied to individual buildings, a separate account would be created for the Fortier building on Freret Street and Lusher’s lower school on Willow Street, Ducote said.

When repairs are needed, the schools would still have to get the projects approved by the OPSB or Recovery School District, but then they could draw from the individual building’s account to pay directly for the work — rather than waiting on an allocation from elsewhere. And, if an individual building’s fund was insufficient for a project needed immediately, the school could seek an interest-free loan from the overall fund against its own account to pay for the project up front, Ducote explained.

“In the past, it was always a struggle,” Ducote said. “If you had a 30-year roof, it would wear out before you could get back to the voters to pass a bond issue, in the roof’s 40th year.”

The creation of the fund has drawn opposition, Ducote said, primarily from people opposed to the Recovery School District having control of any more tax money. But even for those who believe all RSD schools should immediately return to the local control, Ducote said, the need to maintain the new and renovated buildings should be clear.

“This is an issue about preserving buildings, not about governance,” Ducote said. “If we fight a governance fight, the children will suffer.”

The concept of creating a permanent, dedicated fund to pay for “cyclical” repairs to school buildings was actually advocated by Lusher parents in the 1990s, Ducote said, as they grappled with issues at the Willow Street building that are still included in the current renovations.

The current property-tax renewal would last for 10 years, Ducote said. The OPSB could have asked for a 20-year renewal, but felt that voters would be more comfortable with a shorter period and have the opportunity to see it working properly.

The Lusher board did not take a vote on the issue in their October meeting, and Ducote noted that they cannot give any support for it as public officials. The school could create and publicize a list of maintenance items that the measure would address, he said, as well as remind families of the election day — sharing “factual information,” he said, without actually endorsing a position.

The vote on the issue is set for Dec. 6, likely to be a low turnout date with runoffs for only the Senate seat and three local races on the ballot. Board members questioned whether a low turnout would raise or lower the renewal’s chance of passing, giving supporters or opponents more time to mobilize.

Meanwhile, renovations at Lusher’s two campuses are progressing, school officials said. At the Freret campus, where work is underway, the windows have all been removed for historical refurbishment, said operations manager Frank Israel.

“I’m astounded at what good shape they’re in,” Israel said. “All that rain over all those decades — they look a mess. But they clean up very well.”

The large old air-conditioning units have also been removed from a number of classrooms, freeing up an unexpected amount of floor space, Israel said. When the project is finish, the classes will gain not only the footprint of the noisy old units, but also the space around them that was previously unusable for desks.

At Willow Street, where the start of construction was delayed, school officials are having their final meetings with architects about the scope of work, said Lusher CEO Kathy Reidlinger. Bids will be advertised at the end of November, confirmed OPSB Deputy Superintendent Kathleen Padian.

2 thoughts on “The other big election in the Dec. 6 runoff: Orleans property-tax renewal for school building repairs”