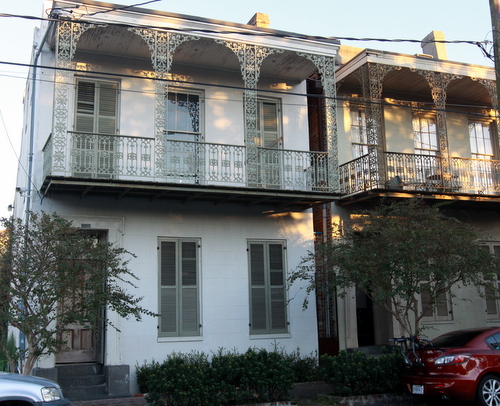 An intimate, European-style “speakeasy” serving wine, cocktails and a few French hors d’oeuvres is planned for a blighted building on Magazine Street in the Lower Garden District, the owners told neighbors on Monday night.

Banks McClintock and his wife, Julie Simpson, bought the building at 1330 Magazine in 2003, thinking at the time they might make it their own home, they told the Coliseum Square Association at the monthly meeting Monday. Built in the 1850s, the building has a long history as business, both as a former Italian grocery and as a Prohibition-era speakeasy.

“You can still see handwritten signage on the walls that say ‘No Dancing,’ and old arrows that point to the men’s room and women’s room,” Simpson said.

McClintock’s background includes work as a bartender and server, and Simpson’s is in design, they said, and their plan for the project now is to combine elements from their favorite locations from New York, Los Angeles and Europe. They plan a full restoration of the building, preserving an apartment, and using part of the downstairs interior for the brasserie.

“We hope to work from this space so it feels like you have stepped into a time capsule from the Prohibition Era with all of its beauty and eccentricities,” Simpson wrote in a letter distributed to the association before the meeting. “Period-correct antique furnishings from France, period-original Beaux Arts lighting, plasterwork and even the glassware and cutlery will all be of the era.

“Picture a passing moment when the bar the Columns is nearly vacant or a slow Tuesday afternoon at the Napoleon House, and then mix all this with the feel of the Apothecary museum,” the letter continues. “Our hope is that everyone who comes in would feel as if they have just discovered a hidden secret.”

The speakeasy’s working name is tentatively “The M,” McClintock said, a reference to its location on Magazine near Melpomene and also its ownership. The couple said they envision the speakeasy as a place to stop on the way out for the evening, so its hours would be limited, from early afternoon to around 9:30 p.m. or 10:30 p.m. It would seat only around 25 to 30 people, they said.

‘Something to aspire to’
The current zoning for the building would allow a restaurant, but Simpson and McClintock said they are seeking a conditional use for a cocktail lounge. Without having the expense of a full kitchen and enough space to seat diners, they can create a smaller space and focus more on creating the ambiance they envision, they said.

“As counter-intuitive as it sounds, a liquor license is a much less intense usage,” McClintock told the association. “The cost of the restoration is considerable. We want that money to go into what people can actually have a tactile feel for.”

While the members of the Coliseum Square Association know Simpson well through her own membership on the board, they still had a number of questions about that plan, mostly about the possible future of the space. If Simpson and McClintock end their involvement for some reason, the next owner could operate a the kind of dive bar that attracted violence to the serious detriment of the Lower Garden District in years past, they said.

“As long as you guys are in direct control of it, I have greater faith in it,” said association member Tom Gault. “But once the liquor license is there, it takes a monumental effort to get rid of a bad place, even a horrendous place with shootings.”

The expense of the restoration, McClintock and Simpson said, will make it unaffordable for any future dive-bar operator. The couple noted they live with their young child within eyesight of the building and will operate the establishment themselves, so they do not have any plans for it to become a burden on the neighborhood.

Asked about parking, Simpson and McClintock said they hope to develop nearby vacant lots as buildings, but with space for parking in the rear as needed. They do not, however, envision crowds at The M.

“We don’t even want signage on the building,” Simpson said. “That’s how secret and small we want it to be.”

Association board member Pat Ibert argued that the project will encourage the type of walking traffic that the association has promoted.

“It would be stupid for us to make requirements for large parking, when our board consistently votes down parking lots,” Ibert said.

For many members, the project seemed a way to enliven a part of Magazine that is currently lacking in both residential and commercial life. Association member Nathan Prescott described a recent walk down Magazine on his way downtown, noticing the lack of activity in that section. The project, he said, will begin to fill that gap.

“That block is dead,” Prescott said. “[The walk] is really pleasant, and then it goes dead, right in your neighborhood.”

Frank Cole, a past president of the association, said he would normally be wary of approving a new bar, especially in the more dense areas of Magazine Street. But given both the location and the promises made by Simpson and McClintock, Cole offered his support.

“If you do agree to limit the hours, I don’t see where this is a loss for the neighborhood,” Cole said.

Many of the vacant lots on Magazine have the same business zoning, McClintock said, and their redevelopment is likely inevitable over time. By creating a project that echoes the historic charm of the Lower Garden District, he said, he hopes it will create a standard for those future projects.

“Our perspective is, that area has a problem, and it needs to be fixed by people,” McClintock said. “We’re trying to put our flag down, and say this is something to aspire to.”

Ultimately, with assurances by Simpson and McClintock that they are happy to sign a good-neighbor agreement limiting the hours and capacity in the ways they described, the association voted 7-1 to support the application for a conditional use. It will be heard first by the City Planning Commission, but has not yet been scheduled for a meeting.

Working through the city’s process will likely take several months, McClintock predicted. With the extensive renovations planned, he said he and Simpson are hoping to open in the fall of 2015.