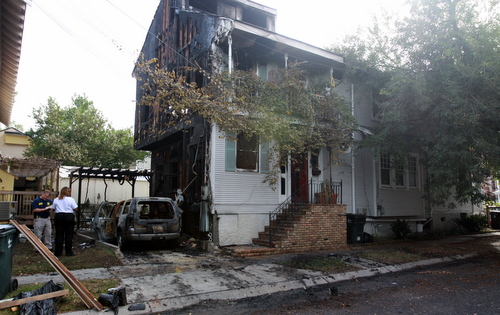 State and local investigators examine the remains of a car parked in a driveway off Constantinople at the corner of Pyrtania Street. (Robert Morris, UptownMessenger.com)

A well-known New Orleans political consultant’s home was heavily damaged by a fire that apparently started in a car parked in his driveway off Prytania Street early Thursday morning, displacing his family and a neighbor.

New Orleans fire officials have deemed the blaze a possible arson as a host of state and federal agents join the investigation, and a chorus of elected officials condemned the attack’s apparent political motivations.

The driveway exits onto Constantinople Street, which Thursday morning was blocked by investigators from the New Orleans Police Department, New Orleans Fire Department, State Fire Marshal and Department of Alcohol, Tobacco and Firearms. Two vehicles on Constantinople across from the house were completely destroyed, as was another car in the house’s driveway. The back end of the house — where the family’s bedrooms were located — was also heavily burned.

When firefighters arrived at 2:33 a.m., both cars were on fire and the flames had spread to the house, according to a New Orleans Fire Department news release. It took 26 firefighters on 10 vehicles to bring it under control, the release states.

“The cause of this fire, with two different points of origin, is deemed suspicious and is being investigated for possible arson,” the release states.

Mario Zervigon, a campaign strategist who has worked for a number of city and state officials, said he woke up around 2:30 a.m. and realized something was on fire.

“I just know I woke up and saw the glow,” Zervigon said. “I opened the door, and saw the entire car engulfed.”

Zervigon got his wife and children out safely, but two of their cats were killed, he said. The family that lived upstairs also got out unharmed, Zervigon said.

With both of his cars burned — one in his driveway, and one across the street — Zervigon said it seems clear that the fire was set intentionally. The fire started with the cars, and its spread to the house may have been an unintended consequence, he said.

“I’m still trying to wrap my head around it,” Zervigon said. “I don’t know if I was targeted. There’s nothing in our lives that would make us think this was going to happen.”

Zervigon’s most recent clients included Judge Bernadette D’Souza, who won re-election on Tuesday, and Forest Wright, who is headed into a runoff for a seat on the Public Service Commission. Wright’s opponent, incumbent Commissioner Eric Skrmetta, issued a statement condemning the arson Thursday morning, according to David Hammer and our partners at WWL-TV.

Zervigon’s role in campaigns frequently focuses on fundraising from supporters, rather than messaging or tactics, and many of his former clients were quick to line up in their support for him and denounce the apparent attack. City Councilwoman Susan Guidry said she already spoke to Zervigon on Thursday morning prior to the day’s City Council meeting.

Firebombing is a rare, but not unheard of, form of political intimidation, Guidry said.

“It’s pretty shocking,” Guidry said. “It seems obvious that it was not accidental or coincidental. Obviously, throughout the ages, this has been a way of sending a message to people.”

State Sen. J.P. Morrell, another client and friend of Zervigon’s, said the fact that the second car across the street also burned makes it clear that the attack was directed at Zervigon. Because the second car was away from the house parked among others, the person who set the fire must have known it belonged to Zervigon, Morrell said.

“It was a politically motivated attack specifically targeting Mario,” Morrell said. “The other car across the street is a definite message.”

Zervigon has also worked for Morrell’s mother, former City Councilwoman Cynthia Hedge-Morrell. Morrell said there is nothing in Zervigon’s personal life or demeanor that would have made him a target, other than his consulting work.

“I know Mario personally. He is a very good family friend,” Morrell said. “This is a pillar of our community whose passion is working on Democratic political campaigns. This guy is a soccer dad who does political consulting.”

State Sen. Karen Carter Peterson and Rep. Helena Moreno were at the fire scene Thursday morning, pledging their support to Zervigon and his family.

“What’s so horrifying is that he was inside with his wife and kids, sleeping,” Moreno said. “Someone could have been killed.”

“I’ve never seen anything like it,” Carter Peterson said. “I’m just happy he and his family are safe.”

The officials all said they are confident that the state and federal agencies involved will conduct a thorough investigation.

“It’s not a random act,” Carter Peterson said. “We know that somebody did this, and that we’re going to find them.”

“Everyone is doing everything they can, both to protect Mario and his family, and to try to determine who did this,” Guidry agreed. 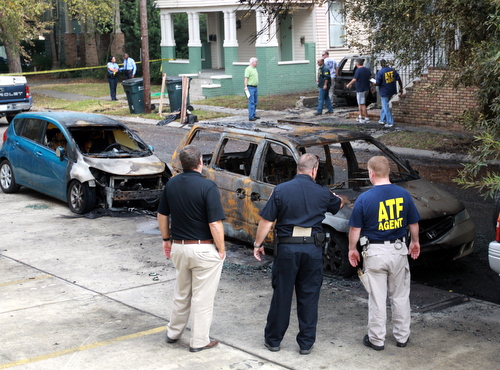 Investigators surround one of the cars that burned across the street from the house. (Robert Morris, UptownMessenger.com) 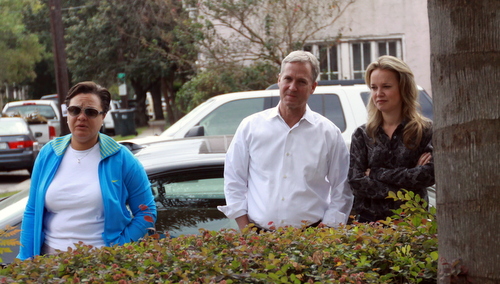