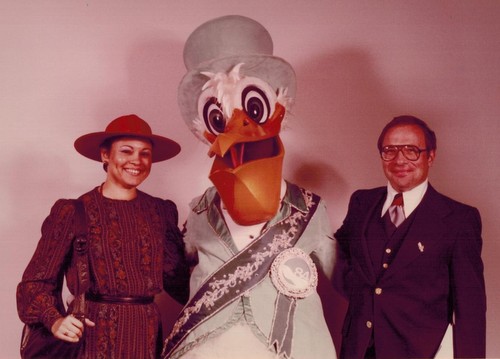 As we mark the 30th Anniversary of the 1984 New Orleans World’s Fair, the memories come flooding back.
It was underfunded and always in crisis, and for those who were part of the World’s Fair team it was a six-month roller coaster ride with near spills every day.

In 1984, Allan was a reporter and columnist at The Times-Picayune. Danae was working in the Morial administration. They met at the Fair at a planning session for the Women’s Pavilion, headed up by Lindy Boggs, Sybil Morial and other feminist leaders. Allan and Bridget O’Brian, an outstanding young reporter who went on to do great things at the Wall Street Journal, had the primary assignment for covering the Fair although many reporters and columnists covered various aspects of the event.

The driving force behind the Fair was the late Lester E. Kabacoff. A great New Orleans developer and visionary, he put together the deal for the construction of the Royal Orleans Hotel in the Vieux Carre and was the brains behind the development of the New Orleans Hilton Hotel on the riverfront. The idea for a riverfront-Warehouse District New Orleans World’s Fair actually came from Ed Stagg, head of the Council for a Better Louisiana. Kabby, as he was known, scooped up the idea and ran with it.

But Kabby had implacable enemies. The late Ashton Phelps Sr., then publisher of The Times-Picayune, believed the World’s Fair was a scheme to enhance the value of Kabby’s riverfront properties. Kabby argued that the World’s Fair would enhance not just his holdings but all of the properties on the riverfront and in the Warehouse District. Phelps wasn’t buying it. The editorial opposition of The Times-Picayune and the negative reporting of the Fair’s finances were major factors in the event’s problems and set the agenda for much else of the news media.

Kabby and Petr Spurney, brought in to run the Fair, were under incredible stress. The Ronald Reagan administration decided to withhold federal funds, making it the only World’s Fair in U.S. history treated as such. Although his wife Nancy did, President Reagan never visited the Fair. Without federal funds it seemed impossible for the Fair to open. But then-Gov. Edwin Edwards felt the state shouldn’t allow the Fair to shut down and fronted the money to pay the contractors, thereby assuring the Fair’s opening. It was one of the many good things that Edwards did as governor that have been forgotten.

As if the Fair didn’t have enough problems, then-Mayor Dutch Morial, who also opposed the Fair, became convinced that Fair officials were scheming to deny the city its sales tax revenues from the Fair. So at the end of the Fair’s run, Morial froze its payroll. It was another crisis, but in the end, the city got its money and the Fair closed with a flourish.

Today, 30 years later, New Orleanians remember the Fair with lots of love and few remember the controversies. We remember the Amphitheater, the Aquacade, the Jazz and Gospel Tent, the Fulton Street entertainment strip and the Great Hall, which today is the Morial Convention Center. There was also the Water Garden, the Wonder Wall, the Kiddie Wash, the Gondola and the nightly fireworks displays. Danae, who represented the Caribbean Pavillion developed by attorney Trevor Bryan, dined many evenings at the fair’s international eateries.

On Friday, at 5 p.m., alumni of the World’s Fair will gather at Convention Center Boulevard and Julia Street to reminisce. Participants will be led by Spurney, now retired in Delaware. Also on hand will be Jim and Janie Brandt, now retired in Baton Rouge.

Among the alumni will be Mark Romig, who was part of the Fair’s Protocol team and occasionally the Pelican mascot named Seymour D’ Fair.

“Being part of the Fair, despite the tumult, was a wonderful experience,” says Romig, who is today the president and CEO of the Greater New Orleans Tourism Marketing Corporation. “It’s appropriate that we gather on the 30th anniversary of the Fair to remember those who have passed – Kabby, Dutch, Allen Eskew, the architect who designed the Wonder Wall, and others. There is no question today that the World’s Fair vastly enhanced the Warehouse District and the riverfront. We who were part of it all have much to celebrate 30 years later.”

Even though Senator Mary Landrieu carried New Orleans and even Jefferson Parish (despite not winning one East Bank precinct), it will be difficult, but not impossible, to get out the votes she needs on Dec. 6. Approximately 115,000 Orleans Parish voters went to the polls on Tuesday. A higher percentage of white voters than African-American voters participated.

With a 12 percent white/black differential, Landrieu needed a stronger African-American turnout to boost her otherwise weaker numbers in the northern part of the state. But the differential was good for white candidates like Judge Frank Marullo and Judge Chris Bruno and African-American candidates like former interim council member Ernest “Freddie” Charbonnet, who had built support in the white community from Republican groups. Charbonnet, running to be the only male judge in Orleans Parish Juvenile Court, is beefing up his campaign team in preparation for a tough runoff against a popular African-American candidate, Desiree Cook-Calvin. Janet Ahern, a white long-time family court practitioner, faces Monique Barial, an African-American lawyer with a Creole pedigree, for a New Orleans family court seat.

Nakisha Ervin-Knott clearly outworked Judge Lloyd Medley in the New Orleans Civil Court race. She led by more than 1,000 in early voting, due to her support among African-American females, and never looked back. African-American females are clearly the city’s largest voting black and those numbers are reflected in Civil District Court.

Judge Frank Marullo’s battle has just begun. Though elected without a runoff, he will face a serious court challenge focusing on his age rather than his judicial abilities. Voters across the state did not eliminate the retirement age for judges. Marullo will have to make a strong case against age discrimination.

We are also not surprised that the voters turned down Sheriff Marlin Gusman’s request for more spending leeway on funds collected through the Law Enforcement District. Gusman and Landrieu need to rework the District to include a board which will monitor spending and increase accountability to the voters. Currently Gusman runs the District independently. Perhaps the BGR could work up a better model.

While Landrieu, Cassidy and the judicial candidates are all continuing to campaign, the public won’t be paying much attention until after Thanksgiving – giving the candidates just one week to drive their messages home.