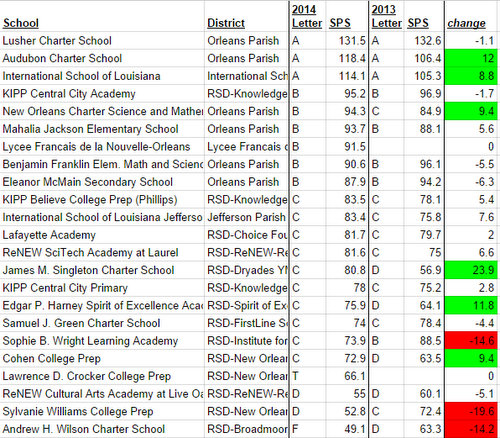 School Performance Scores for Uptown campuses, based on date released by the Louisiana Department of Education. (UptownMessenger.com)

While Lusher Charter School remained the highest-performing school in Uptown New Orleans last year, two language-immersion schools surged forward to narrow the gap, according to the latest School Performance Scores released by the state this week.

Three other Central City elementary schools also showed improvement, growing from their previous grade of a ‘D’ in 2013 to a ‘C’ this year, the reports show.

But three other schools — each of which had been singled out for growth in previous years — tumbled precipitously in 2014, losing a letter grade from previous year’s performance.

At the top of the list
Lusher, a selective-admissions charter school, remained the highest-rated school in the Uptown area, and the second only to Benjamin Franklin High School across the entire city. Lusher’s performance score actually slipped slightly, however, falling about a point from 132.6 last year to 131.5 this year.

Immediately behind Lusher in the Uptown area were two language-immersion schools, Audubon Charter School (which includes both French-curriculum and Montessori tracks) with 118.4 and the International School of Louisiana (which teaches children in French or Spanish) with 114.1. Their scores surged forward 12 and nearly 9 points respectively from last year, and ISL is the only of Uptown’s A schools with a kindergarten class considered completely open-admission. (The ISL expansion in Jefferson Parish also grew its score by 7.6 points, improving its ‘C’ rating to 83.4.)

‘B’ schools
The New Orleans Charter Science and Mathematics High School (Sci High) also showed a 9-point growth last year, strengthening its B grade with a performance score of 94.3.

Lycee Francais received its first school performance score of 91.5, also a B, after its classes reached the start of state testing in third grade last year. The scores were based on tests of about 30 students, and this year has more than 85 students in third and fourth grades who will take the tests, school officials said.

Fast growers
Three schools around the Central City area grew their ratings by an entire letter grade, each earning a ‘C’ this year after a ‘D’ last year:

Andrew Wilson Charter School, an independent charter school in Broadmoor, fell 14.2 points, from a D last year to an ‘F’ this year with a score of 49.1. Wilson was among the first schools to reopen after Hurricane Katrina, and its scores were on the upswing as recently as 2011 (though an exact comparison is difficult because of the major realignment two years ago from a 200-point scale to 150 points). This year, Wilson was the only ‘F’ school still open in the Uptown area, after the closure of Benjamin Bannker over the summer, and Danielle Dreilinger of the Times-Picayune writes that the grade makes renewal of Wilson’s charter uncertain.

Sophie B. Wright Learning Academy, another independent charter that spent last year in the temporary location of the former Johnson campus in west Carrollton, fell 14.6 points and lost its former ‘B’ rating, ending with a ‘C.’ With steady growth in previous years, Wright had been considered a strong candidate to qualify to return from the Recovery School District to oversight of the Orleans Parish School Board.

When the results of all the schools in the city of New Orleans are combined (such as the Orleans Parish School Board and the Recovery School District), the total performance score was unchanged from 2013 at a ‘C’ of 83.4, Dreilinger writes in a separate Times-Picayune article. Many schools meet the new threshold of an SPS of 54 for a school to return from the Recovery School District to the Orleans Parish School Board, Dreilinger notes, though no charter’s governing board has voted to do so.

The full results and individual school report cards are available at the state Department of Education website.

One thought on “Some Uptown schools soar, others tumble in latest performance scores”