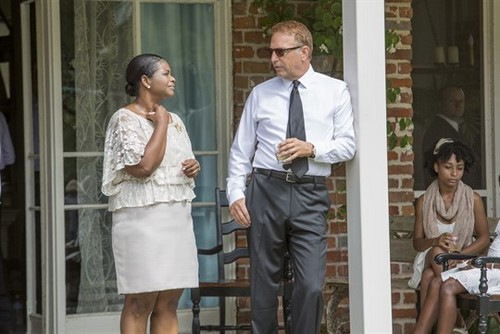 A shot from the film “Black and White,” screening during the New Orleans Film Festival.

While participating in the parade of documentaries, foreign and independent films, and Hollywood features that will headline the 2014 New Orleans Film Festival, Uptown’s landmark Prytania Theatre will also screen a substantial number of legendary movies that may have played much earlier in its 100-year history.

The New Orleans Film Festival opens tonight (Thursday, Oct. 16) downtown at the Civic Theatre with Kevin Costner and Olivia Spencer in “Black and White” as a white grandfather and black grandmother in a custody battle over a biracial child, but that entry will also play at The Prytania next Wednesday, Oct. 22. Other high-profile features showing at The Prytania are Benedict Cumberbatch as persecuted computing forefather Alan Turing in “The Imitation Game,” and the race-relations satire “Dear White People.”

The theater will also show an array of classics, starting with “Blaze” Friday morning (Oct. 17) with Paul Newman portraying Earl Long during his relationship with French Quarter burlesque dancer Blaze Starr. Other classics include “Steel Magnolias,” Jim Jarmusch’s “Mystery Train,” Lauren Bacall and Rock Hudson in “Written on the Wind,” and a few seasonal horror movies, such as the original “Night of the Living Dead.”

Its documentary lineup will focus on Nat King Cole, B.B. King, President Obama’s mother, the BP oil spill and a Passion play performed at the state prison in Angola. Foreign auteurs Bernardo Bertolucci and Jean-Luc Godard will also be featured, and three different packages of short films shot in Louisiana are scheduled.

The film festival is expected to draw more than 22,000 attendees to films playing across the city, and The Prytania is not the only Uptown venue participating. On O.C. Haley Boulevard, the Ashe Cultural Arts Center will show two films on Wednesday, Oct. 22: “By Blood,” about the descendants of former African slaves of the Cherokee Nation, and the Nat King Cole documentary.

For the complete lineup, see neworleansfilmfestival.org.