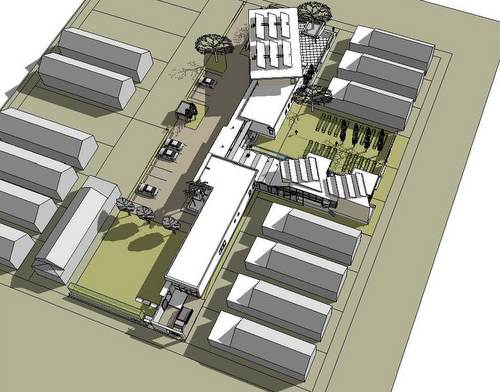 A rendering by architect David Keiffer of the proposed community center in Carrollton. (via Carrollton-Riverbend Neighborhood Association)

As the start of construction nears on a new community center funded by a state investment of more than $1 million, members of the Carrollton neighborhood remain apprehensive about the organization chosen to operate it — despite repeated assurances from officials that this is the most effective use of the land and the money moving forward.

Trinity Christian Community, a Hollygrove-based social-services ministry founded in 1967, is seeking bids this fall for the building in the 1700 block of Monroe Street that will serve as its new headquarters, and hopes to begin construction in January, officials have told neighbors in a series of recent meetings. The $1.7 million project is based primarily on state funding for a community center planned for the property starting with the late state Rep. Alex Heaton and dating back years before Hurricane Katrina, officials have explained.

The history of the funding for the project, how it ended up in the hands of a private, church-based organization, and what accountability Trinity Christian Community will have continues to be a concern for neighbors and members of the Carrollton Riverbend Neighborhood Association, however.

State Rep. Walt Leger told members of the association at a special meeting on the issue in September that he is unsure how Trinity Christian Community was chosen five years ago to take over the project after the original concept was derailed by Hurricane Katrina, and when pressed by neighbors on the history of the original money trail, called it “certainly disappointing.” But what is clear now, Leger said, is that partnering with nonprofits is the only way new community centers are going to come into existence in the foreseeable future.

“The City of New Orleans is not in a financial position to build and run new community centers on their own. The way to achieve that is through partnering with other entities,” Leger said, but promised to continue fighting for more services to fill any void in the neighborhood left by Trinity Christian Community’s project. “We ought to be in a posture where we’re all pulling on the same color jersey and trying to get more for this part of the city.”

The legislation that creates the funding for the community center requires it to offer five kinds of services to the community, according to documents obtained by Barry Brantley, the president of the Carrollton-Riverbend Neighborhood Association. It must have adult literacy classes, after-school tutorial and computer programs, job training and placement services, a senior center and nutrition site, and a community meeting area.

Association member Betty DiMarco said the history of the project leaves the Carrollton community skeptical that the center will meet the neighborhood’s needs. A City Council meeting extending the zoning for the project in March, for example, led to a sharp exchange between Councilwoman Susan Guidry and some opponents of the project.

“There is a tremendous amount of distrust,” DiMarco said. “It is going to be a tremendous challenge for the community to come together and make anything work, because we’ve got some tremendous divisions.”

Trinity Christian Community director Kevin Brown promised to take the board’s opinions to heart. The organization drew accolades from several City Council members in the March meeting, and has been lauded for contributing to a reduction in crime in Hollygrove.

“I’m a product of this very community, and my heart is for this community. I want to see things work. I want to see this project work,” Brown told neighbors at the September meeting. “I have always said, and will continue to say, we want input from the community.”

Association member Jason Coleman, who has been a vocal opponent of Trinity’s control of the project, said he questions why an advisory board is needed. Why not simply add members of this community to the nonprofit’s actual governing board? he asked.

“An advisory board, that doesn’t carry weight to actually getting it done,” Coleman said. “I think the [Trinity] board is big enough to have representation from the community, if it’s for the community.”

Former association president Jerry Speir, however, said the actual people on the board are all known for being outspoken, and that he believes they will provide a measure of oversight.

“I don’t see any wallflowers there. I know those people,” Speir said. “If there are any issues with how TCC is operated, we will know about it from that group.”

Members of the Carrollton Riverbend Neighborhood Association learned last week that one of the proposed members of the advisory board, Nicole Bouie, had decided not to serve. Bouie operates a program called Community Commitment that recently moved to 8540 Spruce Street, and has recently opened a coffee shop in the adjoining space at 1923 Leonidas called “Stella’s” to help defray the center’s $4,000 in monthly expenses.

Neighbors have questioned whether the advisory board will have any real authority over Trinity Christian Community, but Bouie declined to discuss those issues in an interview late last week. She opted not to serve on it, she said, because she felt her energy would be better spent focused on Community Commitment.

“I simply wanted to be a part of a governing board, not an advisory board,” Bouie said. “We already have a community center operating. My goal is to make sure this center thrives.”

Even after the meetings with officials, some neighbors are still hoping the Carrollton-Riverbend Neighborhood Association will announce its opposition to the project based on those concerns, said member Drew Ward (a former City Council candidate). Any action like that, however, seems moot with construction so close to starting, he said.

A better course, DiMarco agreed, is to maintain vigilance that Trinity Christian Community is actually fulfilling the five requirements for the center laid out in the state legislation.

“I don’t think we would have gotten as far as we have if Walt Leger had not stepped in,” DiMarco said. “These are the things, under the legislation, that are supposed to be there.”

Brantley, the association’s current president, said the key for moving Carrollton forward is to be clear about what the neighborhood needs, to which of those needs Trinity fills by its projected opening of December 2015, and to seek solutions to whatever needs still remain outstanding.

“I’ve heard a lot of the hurt feelings and the challenges that have been issued, and the things that have happened in the past, I don’t excuse them. If this is not serving our community, it’s not serving it’s purpose,” Brantley said at the September meeting. “If it fits in this package, let’s do that. If not, let’s find the next partners for it.” 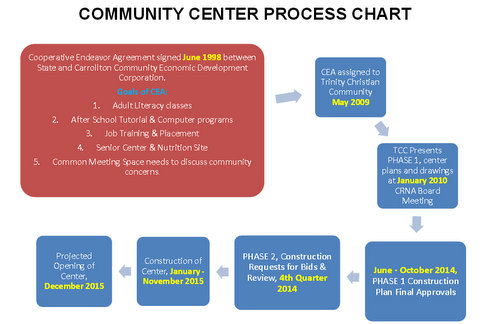