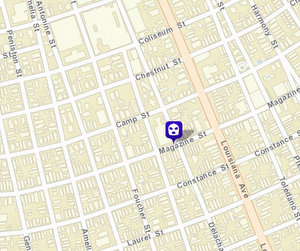 An employee at the shop, a woman in her 20s, was working in a back office in the store at 3454 Magazine Street shortly before 10 p.m. when a man came in with a gun and demanded money, according to the initial NOPD report. The employee handed it over, and the gunman left, the report states.

The man was wearing a mask from the movie Scream, as well as “a gray woven sweatshirt, light-colored blue jeans, [and] gloves,” according to NOPD Officer Garry Flot. His race was not known.

Mahony’s closes at 9 p.m. every night, according to its website.

The Mahony’s holdup was the second robbery reported Sunday. Around 8 a.m., a man in his 70s was inside an apartment in the 3000 block of Pine Street (about two blocks on the river side of Earhart Boulevard) when a stranger came in with a gun, the report in that case states. The gunman “searched the victim then fled with his belongings,” the report states.

Further details were not immediately available in either case. Anyone with information is urged to call CrimeStoppers at 822-1111.