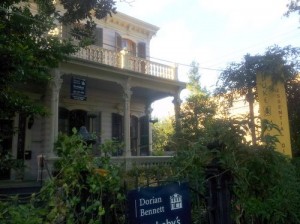 The owners of the French Quarter’s Sylvain easily continued their path toward a new restaurant on Magazine Street last week, when the City Council voted to approve alcohol sales in the building.

One of Sylvain’s owners, Robert LeBlanc, has shared plans with neighbors over the last year to open a restaurant tentatively called “The Manor on Magazine” in the former Duke Morgan Spa at 3607 Magazine Street. The restaurant will focus on the Sylvain chef’s Southern casual cuisine, but in a larger kitchen and a dining room that seats 65.

The restaurant needs City Council permission to serve alcohol at the location, and that request appeared before the Council last Thursday. LeBlanc did not speak during the meeting, but City Council LaToya Cantrell praised the owners as good stewards, noting their repeated meetings with neighbors.

“I want to commend them for coming to Magazine Street and bringing a great dining experience with them,” Cantrell said.

James Smoak of the Touro-Bouligny neighborhood said the restaurant had signed a good-neighbor agreement with the neighborhood, and he wanted to make sure its provisions were part of the ordinance allowing the alcohol sales. The neighborhood, he said, is excited for the project to happen.

“We’re very fortunate that they’re going to be on our street, in our neighborhood,” Smoak said. “We’re looking forward to that.”

The City Council also had a number of other Uptown items pending on last week’s agenda:

Ecole Bilingue’s request for permission to put classrooms in the former St. Henry’s rectory at 812 General Pershing Street was also unanimously approved by the Council, with Councilwoman LaToya Cantrell remarking on the neighborhood’s “general support for this expansion.”

Proposed ordinances to modify the conditions for the operation of Dat Dog at 3336 Magazine Street and to rezone 5243-5245 Tchoupitoulas Street from residential to business for a dentist’s office were both postponed until the Oct. 16 meeting, according to the meeting’s records.