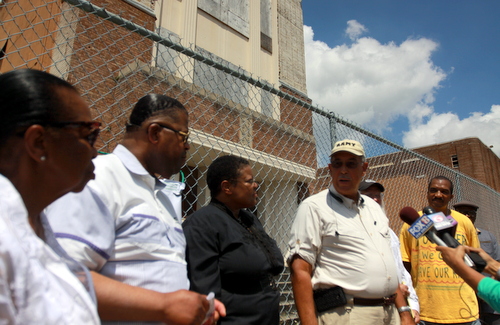 Retired Lt. Gen. Russell Honore (center) and other advocates discuss contamination in the soil at the former Booker T. Washington site in front of what remains of the former school. (Robert Morris, UptownMessenger.com)

When Lt. Gen. Russell Honore led 20,000 federal troops into the city of New Orleans for search-and-rescue missions in the aftermath of the collapse of the federal levees following Hurricane Katrina, he instructed his soldiers not to let the contaminated water touch them.

Nine years later, Honore said, the risk of pollution to New Orleanians is coming not from the failures of the federal government, but from decisions made by leaders right here in the city and state — such as the plan to rebuild Booker T. Washington High School in Central City on top of heavily contaminated soil at the old Clio Street dump. State documents show that in some locations, cancer-causing compounds are present in levels more than 100 times what is considered acceptable.

Many alumni of Booker T. Washington, however, believe that the Recovery School District’s plan for treating the contamination is sufficient, that Honore’s concerns are an unnecessary excess of caution, and that it is time to move the long-delayed construction of a state-of-the-art school forward.

‘Poison in that ground’ 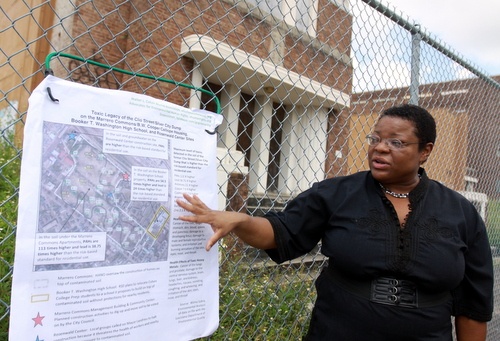 Attorney Monique Harden points to areas of contaminated soil around a map of the Booker T. Washington site on the fence in front of the school. (Robert Morris, UptownMessenger.com)

The dump operated until the 1930s, when it was closed because of complaints by the Central Business District about the odors emanating from it, said attorney Monique Harden at a press conference Tuesday afternoon at the Booker T. Washington site. It was then slated for conversion into low-income housing projects and the former Booker T. Washington school, but pollution in the former dump was never a concern — the city simply leveled the ground to make it flat enough to build on top of.

“We’ve been working to unearth the secrets that are locked in the files at the Louisiana Department of Environmental Quality about what’s been going on at this site,” Harden said.

The records show that contamination extends at least 15 feet under the surface, where the deepest soil samples were removed, though it run be deeper. The most common contaminant was a group of toxic chemicals called polycyclic aromatic hydrocarbons, known as PAHs, that are often found around waste sites. Soil samples show PAH levels of 54 times the risk-based standards for residential use specifically at the Booker T. Washington site, and lead levels of 24 times the standards.

“The public was never notified of the contamination on this site,” Harden said.

The most heavily contaminated samples, taken from elsewhere on the former dump property, PAH levels are 113 times higher than the standard, and lead levels are nearly 40 times higher, Harden said. PAH, lead and other heavy metals are associated with risk of cancer in all the major internal organs, damage to the nervous and reproductive systems, and other diseases.

“I wonder, did that really have to happen that way?” Gordon asked. “This ground will lead to more death and sickness in this city. … Maybe, if you don’t live in certain areas, you don’t deserve a clean environment — perhaps that’s what some people are thinking.”

The Recovery School District’s plan is to remove a top layer of soil, seal what’s underneath, and then replace the soil above that. But the concern that only a partial remediation is planned because the school will serve low-income students ran through the comments by Honore and other advocates on Tuesday. The current Walter L. Cohen High School students are slated to move there, and their current campus — located in a rapidly gentrifying area just off St. Charles Avenue — is slated to be sold, likely to wealthy developers, the advocates noted.

Meanwhile, a similar remediation plan was ultimately scuttled for a temporary campus for Audubon Charter School in 2011, and a completely new site had to be found.

Honore said RSD officials tout letters from federal agencies approving their remediation plan, but that those are based on bad information and possibly the result of political influence.

“Just because FEMA and EPA send a little note that says OK, it doesn’t mean it’s right,” Honore said. “The people in this city know, they don’t always make the right decisions.”

The RSD has recently been discussing extending the remediation deeper into the soil, but Honore said nothing short of a full cleanup should be acceptable for the school site.

“All I’ve got is my reputation, and I put it on the line to tell you there’s poison in that ground, and it goes beyond six feet. We ought not repeat the mistakes of the past,” Honore said. “If you want to start talking, let’s talk about going down the 15 feet that we know about.” 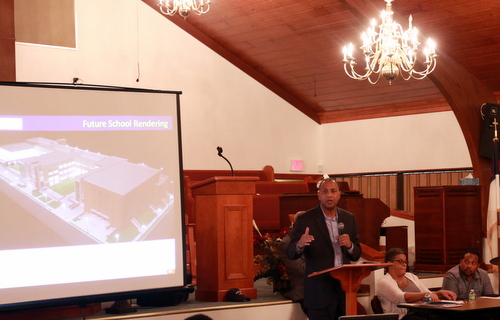 The Recovery School District’s plan, specifically, is to remove the top 3 or 4 feet of soil from the site, then place a “geotextile” barrier over the bottom layer to prevent anyone from digging through it. Workers will then replace the top 3 feet with clean soil, and another 3 feet on top of that to elevate the site for flood protection. Much of the site will then be covered with buildings or concrete sidewalks and parking lots, further sealing the site, said Lona Hankins, the Recovery School District’s facilities director at a meeting Tuesday night at Pure Light Baptist Church on Martin Luther King Boulevard.

In some places where basements remain under the ground, the remediation will extend down as far as 14 feet to surround them, Hankins said. The latest version of the plan received approval to proceed from FEMA on Aug. 11 and from the Louisiana DEQ on Sept. 2.

Honore and Harden both attended the meeting, criticizing the RSD plan because the toxins left underneath the clean layer can still migrate to the surface as the ground sinks naturally. The pews of the Baptist church held a number of people who agreed with their concerns, but it also had just as many or more alumni of Booker T. Washington High School who said they feel the RSD plan appropriately addresses the toxins.

The school construction has stalled for years, and supporters and alumni fear that the longer it is delayed, the less likely is to ever be built. Many of the alumni, former Charity Hospital nurses and other professionals, described the benefits of the strong job training programs at their alma mater, and said the city has suffered without it as an option for students.

“I’m for rebuilding Booker T. Washington,” said James M. Singleton, a 1952 graduate of the school. “I really believe that it is safe.”

Booker T. Washington alumni also support the plan to move the Cohen program into the building, said alumni association president Wayne M. Jones, differing with the Cohen alumni opposed to the merger of the two traditions. It is unlike the controversial consolidation of the L.B. Landry and O. Perry Walker programs on the West Bank, Jones said, because the current Cohen students will simply move into the Booker T. Washington building.

Critics of the RSD remediation plan said they were being unfairly and inaccurately painted as opponents to the rebuilding, however. All they want is for the site to be made safe first.

“I want to see Booker T. Washington come back, but I don’t want to see it come back at any cost,” said the Rev. Lois Dejean of Gert Town, a Cohen graduate. “We’re not against you building a school, but you’ve got to do it right.”

At the end of the meeting, RSD officials did not suggest any further changes to their timeline or remediation plans. The site-remediation effort is expected to commence in early 2015 and take about six months. Construction on the new buildings would start in July 2015, and take two years, finally finishing in time for the 2017-2018 school year.

“We take the safety and health of our students very seriously,” said RSD Superintendent Patrick Dobard. “We’re not leaving any stones unturned. … The plan that has been put forth is solid and in no way will put our students in danger.” 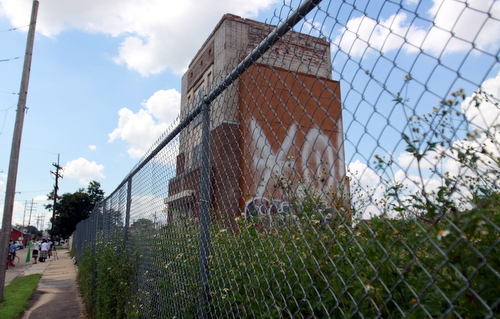 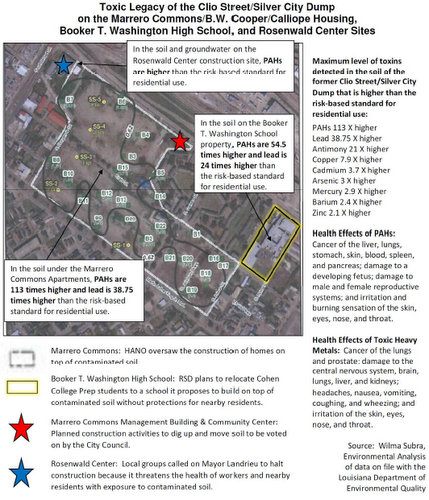 A map of contamination levels at the Booker T. Washington site created by opponents of the RSD’s cleanup plan there. (Robert Morris, UptownMessenger.com) 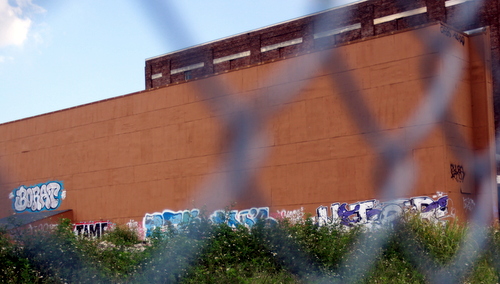