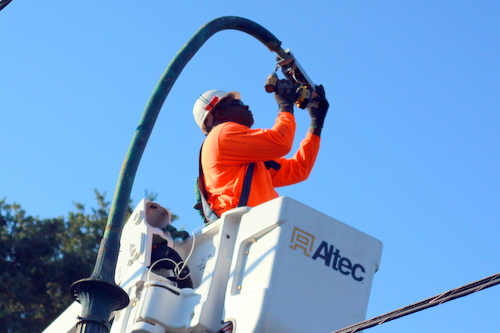 All the streetlights on St. Charles Avenue from Carrollton to the Lower Garden District will be repaired and replaced with new LED lights over the next two weeks, city officials said Monday morning as the work began.

A total of 336 lights will be converted between Carrollton Avenue and Calliope Street over the next two weeks at an estimated cost of around $400,000 — part of the citywide $14.7 million Energy Smart Streetlight Conversion Program, said Department of Public Works director Lt. Col. Mark Jernigan. The St. Charles Avenue work begins as city workers wrap up the previous project, replacing the bulbs on Interstate 10 through New Orleans East.

“The City’s goal is to convert 20,000 conventional streetlights to energy-efficient LED streetlights,” according to a news release about the program. “LED streetlights have a 7-10 year life span (compared to 2-3 years for conventional), use 30-50% less energy, and provide better lighting.”

Jernigan described the project as a “team effort” between the New Orleans RTA, Entergy and the city. The RTA made repairs to its underground infrastructure during the work on the St. Charles Avenue streetcar tracks, and Entergy followed up to ensure that all the light poles had power.

“Now it’s the city’s turn to come in and do the conversions,” Jernigan said.

Workers will also straighten all leaning streetlight poles on St. Charles Avenue, though that work may extend another week or two, Jernigan said.

The persistent darkness on St. Charles Avenue after dusk has been a sore subject all year for residents, who voiced concerns that it was unsafe during Mardi Gras and an embarrassment on such a well-known New Orleans thoroughfare. With an estimated 70 to 80 percent of the lights out, the St. Charles Avenue Association organized a “Real Lights, Real Fast” campaign to spur action on the issue.

As Monday’s work began, St. Charles Avenue resident Rob Stuart Vail stepped outside his home, wondering if the work was the sign of another major tourist event to come. When told the lights would be repaired on the entire avenue, he was pleased.

“That’ll be good,” he said. “Some of my friends don’t dare go out of their house at night, it’s so dark.”

A full schedule of streetlight repairs can be found at the city’s website. 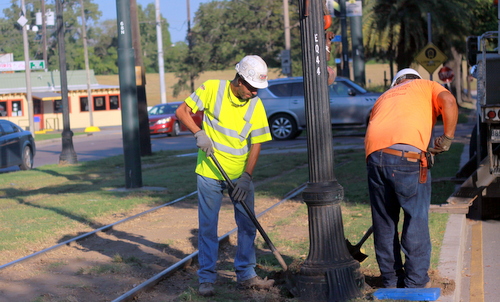 Joey Saluto and Darrick Lavais of All-Star Electric dig around the base of a streetlight on St. Charles Avenue. (Robert Morris, UptownMessenger.com) 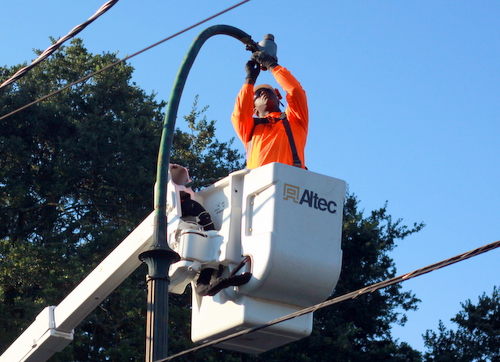 Anthony Reed of All-Star Electric prepares to move an old fixture from a streetlight on St. Charles Avenue near Carrollton on Monday morning. (Robert Morris, UptownMessenger.com)