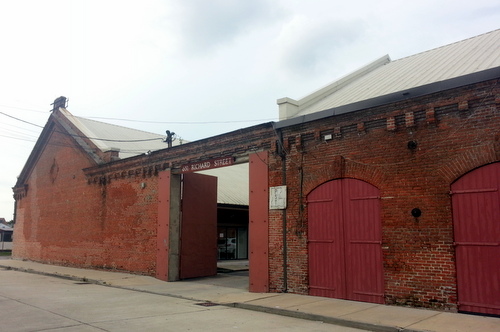 The Southern Rep theatre company is considering the building at 651 Richard Street as a possible long-term home. (Robert Morris, UptownMessenger.com)

Southern Rep, the highly regarded theatre company that has been performing all over the city since losing its longtime home at Canal Place two years ago, hopes to settle down in the Lower Garden District, its director told neighbors this week.

Southern Rep was founded in 1986 with a mission of developing new plays, and spent the 19 years prior to 2012 in a space in the Canal Place. After Southern Rep’s lease was not renewed that year, the company went on the road, performing in venues from Ursulines Academy in Uptown to the Contemporary Arts Center downtown, the Ashe Cultural Arts Center in Central City, the Mid-City Theatre and venues in the Marigny and elsewhere, said producing artistic director Aimée Hayes on Monday at a meeting of the Coliseum Square Association.

Meanwhile, the company has been looking for its next long-term home, Hayes said, and has identified a prime candidate in a building at 651 Richard Street in the Lower Garden District. Several individual businesses are already in the complex, and Southern Rep hopes to join them in a space on the St. Thomas Street side of the building, Hayes said.

“I’ve walked through every available space and warehouse in New Orleans to see if there’s a space that makes the most sense,” Hayes said. “Our needs are very specific.”

The Richard Street building is “special,” distinctive for its red brick and ornamental lamps outside, Hayes said. It is just down from Second Line Studios, and it is surrounded by empty lots that can help accommodate parking needs without disturbing residential neighbors. The company would need about 50 spaces for performances, but the complex already has space for about two dozen — and choices for the remaining spots abound nearby.

“We’re in talks on a couple of parking options,” Hayes said. “I’ll give an update once I know exactly how that’s going to work out.”

Use of the space will require a conditional use, Hayes said, but City Councilwoman LaToya Cantrell has already been helpful in trying to locate a new space for Southern Rep, and they anticipate her support on the location moving forward.

“I think it offers a lot of energy and opportunity to the Lower Garden District,” Hayes said.

The theatre will likely serve wine, and occasionally spirits during opening-night parties, Hayes said, but she hopes to pursue a liquor license for the location modeled after the one Le Chat Noir had, with very specific timing when drinks could be served around individual performances. It’s a better option than seeking a special-event permit for every show, which expires after 10 days and would have to be renewed several times during longer runs of performances, she said.

“I don’t want to run a bar,” Hayes said. “That is not what I’m interested in doing.”

Right now, Southern Rep hopes to sign a three- or five-year lease for the site, Hayes said. If the space serves the company well, though, they may seek to make it a permanent home.

“This would be a temporary, three-to-five years,” Hayes said. “We might buy the building though, if it works out.”

Members of the Coliseum Square Association were enthusiastic about the project — one man in the audience encouraged the others to buy season tickets right then. Association treasurer Pat Ibert asked Hayes how they could help.

“I would love your stamp of approval,” Hayes replied. “I think it’s important that wherever you are, you connect with the people around you.”