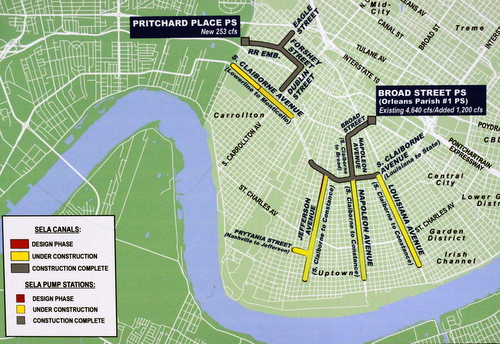 A map of the Southeastern Louisiana Urban Flood Control now shows the final leg on Louisiana Avenue as “under construction.” (Robert Morris, UptownMessenger.com)

If you like navigating around the drainage projects on Napoleon, Jefferson and South Claiborne avenues — or if, more likely, you don’t — get ready: Louisiana Avenue is next.

The $82.6 million installation of a box canal on Louisiana Avenue from South Claiborne to Constance Street — a sister project of sorts to similar efforts on Napoleon, Jefferson and South Claiborne avenues — got its official start back in the summer, when Boh Brothers was chosen as the contractor, said Sewerage and Water Board superintendent Joe Becker before an audience of nearby residents at the Lyons Center on Thursday night. But after site surveying and other preparations, neighbors will begin to see the beginnings of the work on the ground in the weeks to come, as workers begin trimming trees and starting construction near Clara Street.

The trees — the focus of many residents’ questions and subject of outcry when they were removed from Napoleon Avenue — will face different fates depending on their location, and work on them could begin as soon as next week. Those in the neutral ground on the project area will have to be removed completely, said Lori Wingate of the U.S. Army Corps of Engineers. Those along the sides have been measured by a city-approved arborist for their proximity to the work taking place, and will only be trimmed as much as they need to be to accommodate the construction.

The Corps has tried relocating the trees from the neutral ground in previous projects, but found that only the crepe myrtles survived — not the oaks that residents are most attached to, Wingate said. But those on the side of the street will be given protective fencing, so that the construction equipment does not inadvertently damage their roots, she said.

The actual construction will begin next month with relocation of a major sewer line serving much of Uptown underneath Clara Street very near South Claiborne — again, similar to the beginning of construction on Napoleon and Jefferson, Becker said. The second major task will be the construction of new eight-inch water lines on either side of Louisiana Avenue to replace the current six-inch line under the neutral ground. A side benefit, Becker noted, is that water pressure will increase for nearby residents.

A firm start date for construction between Clara and South Claiborne hasn’t been set as final logistical questions are decided, Becker said, but it will be in the coming weeks.

“The current plan is, by the middle of October, Boh Brothers will be out there doing that work,” Becker said.

Those tasks will take as much as a year, after which actual construction of the box canal will begin under the neutral ground, officials said. The final completion is scheduled for February 2018.

During construction, traffic will be reduced to a single lane in each direction, Becker said. Drivers will travel on the lane next to the neutral ground while the new water lines are being built on each side of the street. When that’s done, the outside lane will be paved over, traffic will shift onto it, and workers will use the lanes next to the neutral ground as they install the box canal.

To minimize the interruption to street car service, work on the Jefferson, Napoleon and Louisiana avenue canals will all cross St. Charles Avenue at the same time, the summer of 2015, Becker said. Buses will run on St. Charles Avenue during that time.

The construction on Louisiana Avenue won’t have nearly as much effect on the 2015 Mardi Gras parades as the Napoleon Avenue project could. Construction won’t have reached the parade route on St. Charles Avenue by that point, so the primary impact will be on the vast number of people Uptown trying to get to and from the route, Becker said. Workers will try to “minimize the footprint” of the project prior to parades rolling, so as few paths around the parades will be blocked as possible.

The Irish Channel St. Patrick’s Day parade, which traditionally includes a segment on Louisiana Avenue, could feel more effect, Becker said. But Boh Brothers will take stock of their progress closer to the parades — both for Mardi Gras on Napoleon and St. Patrick’s on Louisiana — and adjust their schedule as much as possible to allow the parades to roll as normal.

Residents have complained since the South Claiborne leg began in 2010 about the fact that so many major corridors in Uptown will be under major construction projects at the same time. Project officials have said that, because the project represents so much federal money, there are a number of reasons to try to complete it all as quickly as is practical.

Cedric Grant, executive director of the Sewerage and Water Board, told residents that officials have learned from each of the previous legs of the project, and are applying that experience to Louisiana Avenue.

“I assure you it’s going to be disruptive, but we want to create the minimal disruption that we can,” Grant said.

[Correction: Because of a typographical error, the original version of this article included the incorrect total construction cost. This article has been updated with the correct figure of $82.6 million.]

One thought on “Tree trimming, first signs of construction on Louisiana Avenue drainage project to start in October”