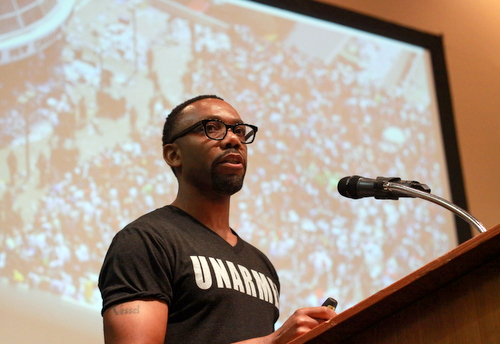 Standardized test scores may be rising in the city’s public schools, but those gains on paper do not translate into any meaningful improvements in the lives of the city’s poorest students, said former New Orleans education official and activist Dr. Andre Perry. Challenging school reformers’ beliefs that a wholesale restructuring of the education system will create a better society, Perry added that all social conditions that plague New Orleans’ poor and African-American neighborhoods still persist even after 10 years of school reforms.

The best first step the city can take to real improvements for the African-American community, Perry said, is to begin searching for a way to reconcile with the thousands of teachers who were wrongfully fired after Hurricane Katrina.

While in New Orleans, Perry was the CEO of the Capital One-University of New Orleans network of four charter schools, and the Associate Director for Educational Initiatives for the Loyola Institute for Quality and Equity in Education. He wrote “The Garden Path: The Miseducation of the City” to illustrate the issues of school-reform in New Orleans. Last year, Perry left the city to become the founding Dean of Urban Education at Davenport University in Grand Rapids, MI.

Perry returned this past weekend to keynote the annual Rising Tide conference, organized by the city’s blogging community to discuss issues relating to the future of New Orleans. The central idea of the school-reform community, Perry said, is that improving public education will lead to an overall improvement in New Orleans social conditions, and that this goal justifies the radical changes they have imposed on schools here — firing teachers, closing schools, moving students every few years.

“If a reform doesn’t improve the lives of people in the here and now it’s a not a reform worth having,” Perry said.

If the goal is to improve the city, Perry said, then their results should be measured by those standards — not the test scores and school-performance scores that change every few years. He listed a number of questions about long-standing issues in the African-American community worth using to evaluate the success of the school reforms:

Reformers instituting polices following Hurricane Katrina failed to include the people they most directly affected — the teachers and students’ families, Perry said. That approach — saying “I’m smarter than you, and therefore this is what we should do to you,” he added — isn’t reform of a system, but “paternalistic experimentation” on it, bound to be resented.

The clearest example of that approach, Perry said, is the firing of more than 7,000 public-school teachers after Hurricane Katrina — a decision that a state appeals court has deemed wrongful termination. That was an example of the “clean slate” approach favored by reformers. Essentially, former teachers were viewed as unable to rebuild it.

Those teachers were the victims of the former broken system as well, but they were blamed for causing it instead of the politicians and policy makers they answered to.

Ultimately, reconciliation with those teachers after the lawsuits are settled should be a primary goal of the next Orleans Parish schools superintendent, Perry said. The OPSB should recognize that their suffering resonated throughout the city.

“The public must see this day as a day of reckoning,” Perry said.

He thinks the new OPSB superintendent, for which Perry himself has been mentioned as a possible candidate, must also re-unify the schools under a single district. The charters can maintain autonomy — Perry cited the de-centralization of leadership to individual schools and communities as a positive aspect of reform — -but they should no longer be under the fractured state-level political jurisdictions that currently exist.

“New Orleanians must become the stars of our own recovery,” Perry said.

Another positive aspect of the reform movement, Perry said, is that so much about the school system is now being measured and converted into data. But he is concerned, he said, that the data is not being used to improve the schools, but is being cherry-picked to create the appearance of progress. If students are expelled for behavior problems, that may improve the individual schools’ data, Perry said, but it hurts the city when those students take their issues out onto the streets.

“I was a big fan of data, but I think it’s actually being used incorrectly on purpose,” agreed Jason France, the education blogger known as “Crazy Crawfish,” who is also running for the state Board of Elementary and Secondary Education.

Mere test scores miss the point, Perry said. The most serious measure of whether those in New Orleans’ impoverished communities are actually receiving the benefits of better education is in their overall preparedness for disaster, Perry said, while standing before an image of crowds awaiting evacuation after Hurricane Katrina nine years ago.

Those people couldn’t have left the city if they wanted to. They had no support network outside New Orleans, no money for extended lodging, no skills or experience with which to get a job in their new location and no way to navigate the complex bureaucracy of insurance and recovery if they wanted to return.

If another major storm took place next year, after 10 years of educational reforms and rising test scores, Perry asked, would those people be any better prepared to handle the challenges it created?

7 thoughts on “Dr. Andre Perry: New Orleans test scores may be rising, but future is no brighter for city’s poor”