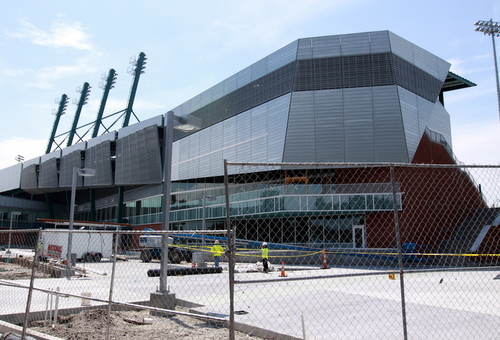 With Tulane University’s first on-campus home game less than two weeks away, university officials and residents in the Uptown areas are discussing the details of the central question about the once-controversial stadium: What will game day look like in the neighborhoods around the stadium?

Will it be a return to the front-yard cocktail parties of the old Sugar Bowl days? A crasser, modern version, more akin to the obnoxious abuses of public property that draw complaints every Carnival season? Or will the parties largely follow the elaborate on-campus plans envisioned by university officials?

Tulane will host six home games this season in the 30,000-seat Yulman Stadium (technically, a seventh is possible if the Green Wave boast the best record in their conference and host the conference championship). How many of those seats will be filled for each game was an open question last year — turnstile records for Tulane games at the Superdome from 2008 to 2012 (obtained by The Hullabaloo student newspaper in a public-records lawsuit) showed an average of fewer than 5,500 fans in attendance per game, with some games drawing as few as 2,000 people — but last week, the final 2,000 tickets to the Sept. 6 home opener against Georgia Tech sold out in less than 14 minutes.

Over the last few weeks, Tulane has been holding meetings with neighbors to explain the security, traffic, parking and litter plans it has put in place for home games. Standard Parking + Gameday, a company that handles major sporting events such as Super Bowl and the Final Four, has been hired to manage the parking and traffic operations for Green Wave games, said Tulane’s game-day operations manager John Lange in a mid-August meeting.

“We feel that we’ve brought the best in the business to help us with our traffic plan, with our parking plan and also with the shuttle program we’re going to be running,” Lange said.

For parking, for example, Tulane has already leased a total of nearly 10,500 spaces. Twelve lots are either on-campus or just off it, and they hold 2,000 spaces. Seven more off-site locations with another 8,500 spaces have also been leased as far away as the Ochsner campus in Jefferson Parish or the Superdome downtown, and shuttles will drop those fans off in the right lane of South Claiborne in front of the stadium.

Those off-campus sites, which ticket holders can reserve for $10 per game, have been the most popular, Lange said.

“They are choosing the remote sites,” Lange said. 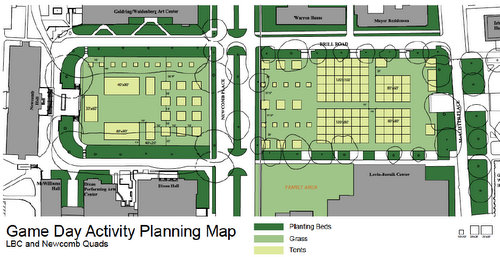 A diagram of on-campus tailgating options on Tulane’s central quadrangles. (image via Tulane)

Tulane plans to concentrate most of its tailgating in the two large grassy areas in the center of campus. The Newcomb Quad will be for tents set up by the university that fans can reserve ahead of time, and the Lavin-Bernick Center quad will be open to the public. Tailgaters will even be able to drive onto campus and offload their grills and other supplies ahead of time, Lange said.

Traffic will be restricted on Willow Street, and Audubon Boulevard between Willow and Claiborne will be closed to vehicles from three hours before each game. (Residents of the street will have permits to allow them in.)

Traffic will be restricted on Audubon three hours before each game, but the on-campus tailgate village opens four hours before kickoff, officials said. Residents asked whether tailgaters could slip on to Audubon and park prior to traffic being closed there, but officials said parking laws will be enforced there during the same time period.

Audubon Boulevard will still be open Claiborne to Walmsley, however, which resident Billy Marchal said contradicted the original plans agreed upon by the Mayor’s Office, Tulane and residents.

“Why are you not putting into place what you agreed to and told everybody you were going to do?” Marchal said.

The Department of Public Works will be strictly enforcing towing laws in the neighborhoods, said Cheryn Robles of the city of New Orleans. The city will have officers in the area who can be deployed within two or three minutes of a call about a vehicle improperly parked, and a tow truck will follow immediately afterward if a violation is found.

“If I park my own car too close to my driveway, will I get ticketed?” asked one resident.

“Yes,” Robles replied. “This is parking enforcement, so use your driveway.”

Sanitation workers will deliver trash and recycling cans to sidewalks throughout the neighborhoods around campus, such as Audubon Boulevard, Broadway Street, Palmer Avenue, Versailles and Maple Street. Some residents worried that the placement of trash cans on Audubon Boulevard will actually serve to encourage people to try to tailgate there, and asked for “no tailgating” signs to be affixed to them.

John Saunders, former president of the Audubon Boulevard Parkway Association and an early supporter of the Tulane stadium project, said he fully supported the extra trash cans around the neighborhood, and encouraged his neighbors to support Tulane’s efforts.

Residents also asked about the possibility of fans parking large recreational vehicles on Audubon Boulevard or nearby the night before the game. City law already bans RVs from parking on public streets, replied the city officials.

“If necessary, we’ll get those vehicles moved,” Robles said.

If cars are properly parked and other laws are being followed, the law does not prohibit people from being “in” the neutral ground on any street during games, so enforcement will depend on specific circumstances and residents’ tolerance for the activities taking place outside their homes, city officials said after the meeting. South Claiborne Avenue is a particular public-safety concern because of the high-speed traffic passing by, so parking, tents and grills will be prohibited there.

In general, the officers patrolling the neighborhood will not be told to order people out of neutral grounds simply because they are standing there, said Tyler Gamble, a city spokesman. On the other hand, they will be enforcing other laws regarding public safety and quality of life, Gamble said.

“First things first, let’s use common sense when we’re out there,” Gamble said. “If it looks like it’s going to be a public safety issue, then they’re going to respond to it.” 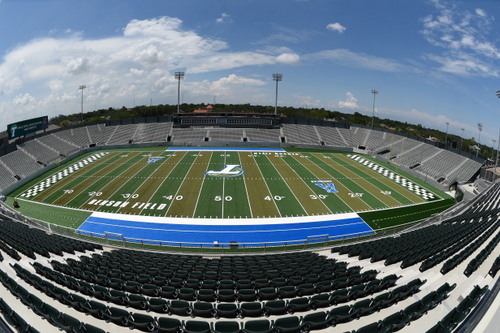 4 thoughts on “What will tailgating be like for Tulane home games?”