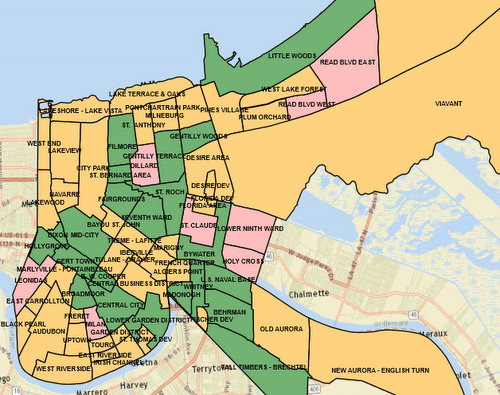 Streetlight repairs have been completed in neighborhoods marked in green, are underway in pink areas, and still to come in orange zones, as of August. (source: nola.gov/DPW)

When New Orleans Mayor Mitch Landrieu asked the residents of City Council District B how the city should spend their tax money Tuesday night, the answers nearly all involved streets: the holes in them, the lack of light on them, and the people who sleep on them.

Most of those problems — like all of those before the 300-year-old city — lack easy answers, and have been compounding for decades, Landrieu replied. But on at least one complaint, there is a glimmer of hope: the long-darkened streetlights along St. Charles Avenue are scheduled for repair in September.

Public-input sessions about the budget are a yearly exercise for Landrieu (Curious how much, or little, things have changed? See our coverage from 2012 and 2013). Typically, the mayor gives residents the floor for the first 60 to 90 minutes, allowing them to air any number of concerns while he takes note. The latter portion of the meeting then becomes Landrieu’s extemporaneous responses to the issues, usually a healthy serving of the mayor’s broad views on civic affairs peppered with specific plans for the coming year, and this year’s followed the same format.

In Tuesday’s meeting, St. Charles resident John Martin said that two-thirds of the streetlights on St. Charles Avenue remain out, plunging one of the city’s most recognizable thoroughfares into darkness after dusk and putting pedestrians at risk of criminals and traffic crashes. Martin had previously complained to the City Council in January about the same issue, asking whether the lack of lighting made St. Charles too dark for parades.

To that, the mayor replied, there is good news. The City Council dedicated a $14.7 million refund from Entergy (based on overcharges in previous years) to replacing streetlights around the city, and the work is scheduled to reach St. Charles Avenue in mid-September.

The mayor took about 30 other comments Tuesday, and street repaving and homelessness were two other issues that were aired repeatedly.

Fix my streets?
On street repaving, the mayor said, the city focused its efforts after Hurricane Katrina on rebuilding the major roads, and Landrieu rattled off a rapid-fire list of those that have been repaved in the Uptown area: Magazine, Freret, Nashville, Broadway and Leonidas, South Claiborne, Tchoupitoulas and others. (The final leg of Magazine is scheduled to begin in the coming months.) Indeed, the mayor said, a common complaint in Uptown New Orleans is how hard it is to get around with so many roads under construction at the same time.

But that doesn’t improve the interior roads, those that lead to most residents’ homes, and if there’s an impassable pothole in front of your house, the larger roads likely don’t matter to you at all. Each mile of road costs $7 million, and there are 1,500 miles of interior roads in the city — meaning that a major new source of revenue is necessary, Landrieu said.

Likewise, the city has repaired 143,000 potholes in the last four years — but most residents still have potholes worth complaining about.

“We have to do more, because we’re not close to being finished,” Landrieu said.

New sources of revenue will be necessary for many of the city’s ills, such as hiring more police, and a number of proposals have been floated:

“We are exploring all of those things,” Landrieu said, and promised more concrete recommendations on each of them in the months to come.

The issue is made more urgent, he noted, by the ongoing reduction of federal and state money for cities.

“Nobody’s coming to save us, so we’ve got to figure it out ourselves with difficult choices,” Landrieu said.

“The American citizens under the bridge”
Several residents asked Landrieu about the plan to deal with the homeless people living under the Pontchartrain Expressway, and Landrieu said their very questions illustrate the divergent views about the issue. Some people believe that they are an “unseemly” mass that present a public safety threat to people who live nearby, and that they should be forced to move. Others believe that simply moving them does little to fix the problem, and likely infringes on their Constitutional rights as Americans, Landrieu said.

The city has already reduced its homeless population since Hurricane Katrina by 86 percent to about 2,000 people, based on a coordinated effort by social-service agencies to get them in touch with the help they need to get off the streets. And the goal, Landrieu said, is to use that approach to get them all off the streets in 10 years.

The recent sweep of homeless encampments under the Expressway had “nothing to do with the Saints,” Landrieu said, but was prompted by the growing public-health hazard represented by acts of violence inside the tents, accumulations of human waste and growing rodent populations. City workers personally informed everyone under the bridge of the coming notice to vacate, and housed 86 of them, he said.

But some of those who didn’t accept services moved down closer to the river. The City Council has proposed tougher laws restricting those activities, but there are concerns that the law is overly broad, and would restrict other gatherings that should remain legal.

In the meantime, he said, it appears as though the residents who remained under the Expressway are keeping the area cleaner, preventing the imminent health dangers that prompted the first sweep. On a similar note, Landrieu said, the police cannot simply run off the people who hang out in the South Claiborne neutral ground unless they are caught breaking the law.

“There are a lot of New Orleans citizens that like to sit out on the neutral ground every day,” Landrieu said.

The fight against blight faces a similar challenge, he said — many of the blighted properties are owned by other private citizens, so the city has to be caution and deliberate in its approach to addressing them.

“I think we have the best blight reduction strategy in the country,” Landrieu said. “But in America, it’s not easy to take people’s private property away from them.”

But again, turning to the broader issue, Landrieu said his office is extremely focused on addressing issues of income inequality in the city — specifically, the 52 percent of African-American men who are unemployed. City workers are actively trying to connect those residents with job opportunities around the major public-works projects in the city, the new hospitals and the new infrastructure.

Standard & Poor’s, one of the major U.S. stock-rating agencies, has noted that income inequality is slowing economic progress around the country, Landrieu said, and that is as true in New Orleans as it is elsewhere. All of New Orleans will benefit from decreased crime and increased tax revenue if poverty is addressed.

“You cannot have a city that survives if there is not equal opportunity,” Landrieu says. “This is not a zero-sum game. What helps one helps the other.”

Residents’ questions and Landrieu’s responses touched on an array of other issues, including the city’s defunct crime cameras. To read our live coverage, see below.