A 35-year-old man was arrested early Wednesday morning on an attempted-murder charge after Louisiana State Police saw him shooting at a homeless man inside a tent after an argument, New Orleans police said.

The victim, a man in his 50s, told investigators that he was in his tent under the Ponchartrain Expressway overpass near Loyola and Calliope around 12:40 a.m. Wednesday (Aug. 6), when he was approached by a “daughter figure he knew from the area,” according to the NOPD arrest report. The woman told the victim that she was trying to get away from her ex-boyfriend, 35-year-old Cleveland L. Bell Jr., so the older man confronted Bell, the report states.

“The victim stated Mr. Bell pointed the handgun in his general direction in the tent and fired it as he, the victim, moved to the side of the interior of the tent to get away from the handgun,” the NOPD report states.

A plainclothes Louisiana State Trooper in the area saw Bell shoot into the tent but Bell fled when the officer approached, running from Calliope onto South Saratoga Street nearby, the report states. After closing down the block, a NOPD police dog found Bell hiding under a house in the 1200 block of South Saratoga, and found a .380-caliber handgun and crack cocaine in an empty lot next to the house as well, the report states. Bell subsequently tested positive for gunshot residue, and the victim was able to identify him as the shooter as well, the report notes.

Bell is charged with attempted first-degree murder, armed robbery, possession of a firearm by a convicted felon, an active warrant for home invasion, resisting arrest and giving a false identity. His total bond is set at $580,000, jail records show.

The Louisiana State Police cited Bell’s arrest as part of their ongoing assignment in New Orleans.

“Troopers have been assigned to New Orleans for the last 28 days,” according to a State Police new release. “During that time, they have arrested 315 individuals with a total of 512 criminal charges. 141 of those charges were for narcotics. 19 weapons have been seized from individuals that were illegally carrying those weapons. 20 stolen vehicles have been recovered, 10 of which had apprehensions of suspects. State Troopers have answered over 885 calls for service from the public.”

“The quick actions of these Troopers are exactly what we have challenged those assigned to the New Orleans detail to do: be proactive, be visible, be observant, respond quickly and take decisive action,” Col. Mike Edmonson, State Police Superintendent said in the release. “Our statistics indicate that our presence is making a difference and we continue to receive positive feedback through our daily interactions with citizens, tourists and businesses.”

The shooting is the latest act of violence to take place in that area in recent weeks. In late July, a bicyclist was severely beaten by a man who emerged from a tent under the overpass, and in a separate incident several homeless people under the expressway were wounded by a group shooting a pellet gun at them. 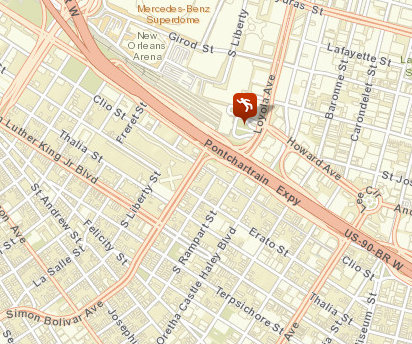