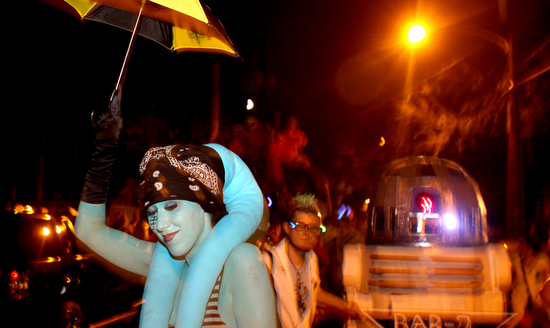 The Intergalactic Krewe of Chewbacchus — shown here on Oak Street in 2011 — are stalwarts of the Mid-Summer Mardi Gras parade, which this year is set for Aug. 23. (UptownMessenger.com file photo)

Prepare to leave behind your summer doldrums — and perhaps most of your clothing — as the Krewe of O.A.K. has set (Saturday) Aug. 23 as the date for its annual Mid-Summer Mardi Gras parade. 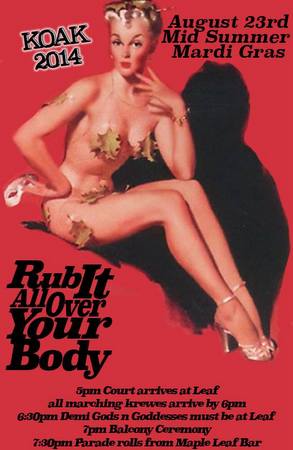 A flyer for Mid-Summer Mardi Gras 2014 on the Krewe of OAK Facebook page.

Known for costumes and props that veer wildly between utter decadance and literal minimalism, the “Outrageous And Kinky” parade will congregate at the Maple Leaf Bar in the 8300 block of Oak at 7 p.m. for a Royal Balcony Ceremony, then begin marching promptly at 7:30 p.m.

The 2014 theme is “Rub It All Over Your Body,” a tribute to late Krewe member Lee Madere. Madere — an economist, lawyer, and former director of the Bureau of Governmental Research think tank — was also instrumental in keeping the Po-Boy Preservation Festival on Oak Street before his death at age 71 in 2010, according to an article by John Pope of The Times-Picayune.

“When Lee would eat something he was especially fond of, he would exclaim, ‘This is so good I want to rub it all over my body,'” wrote Krewe of OAK bard Jamie Bernstein in an email to Uptown Messenger. “The phrase is traditionally uttered loud and in a high-pitched pterodactyl yelp.”

“The theme is a way of paying homage to those who have given us their support and laughter over the years,” Bernstein wrote.

Although the parade in years past served as a bar crawl to some of Carrollton’s landmark watering holes, the route has simplified. This year, (pending approval from the city) the parade rolls from Oak Street up Carrollton Avenue to Palmer Park, stops there, and then returns to Oak Street.

“Everyone is welcome to march,” according to an invitation from the Krewe of O.A.K. “Costumes are encouraged!”

[Note: This article was first published at 10:54 a.m. Tuesday and updated at 4:34 p.m. to reflect that the route is still pending approval from the city, according to parade organizers.]