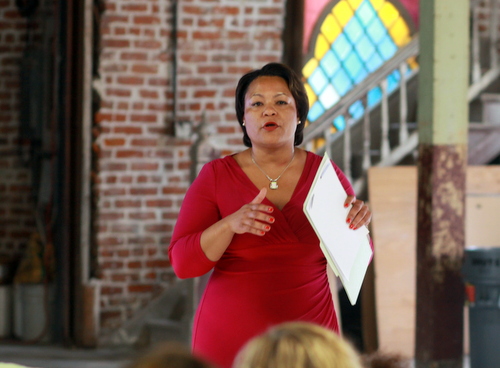 After residents complained that an initial sweep of a homeless encampment under the Pontchartrain Expressway simply moved the collection of tents and panhandlers from one side of St. Charles to the other, New Orleans City Councilwoman LaToya Cantrell is requesting city officials to return and clean out the area closer to the river as well.

Cantrell is also introducing a change to the city law that more specifically prohibits camping on public property, but said she is still looking to residents for answers to the larger question of how to get homeless people off the streets instead of moving them from one spot to another.

Last Thursday (Aug. 14), city officials ordered everyone underneath the Pontchartrain Expressway from South Claiborne to St. Charles Avenue to vacate the area, with city workers cleaning out debris and garbage that was attracting rodents and closing the area to the public. Residents, however, quickly began to complain that the action merely moved the homeless encampments to the river side of St. Charles Avenue underneath the overpass.

On Monday, Cantrell made an unscheduled appearance before the Coliseum Square Association to address some of those complaints. She said that she had been working on coordinating such a sweep since February, meeting with both homeless-services providers and the city’s legal department to create a process that would pass constitutional muster. Residents asked why the action stopped at St. Charles Avenue, and Cantrell said that the city chose that boundary because it’s where the problem was most concentrated at the time.

City officials discovered that the areas under three different on-ramps were being used as restrooms, with about a foot of human waste accumulated. Sanitation workers removed it and fire engines had to hose the areas down afterward. Now, Cantrell said, the city is working with the state to determine how to enclose those specific cavities so they will not be used in the same way once the area eventually reopens.

After the sweep, 84 people chose to accept city services, Cantrell said, but many others preferred to remain on their own. That led to the new encampments closer to the river, she said, or increasing reports of homeless people in parks such as Coliseum Square.

“We know that moving our population from one neighborhood to the next is no solution,” Cantrell said. “It’s a complex problem.”

In the short-term, Cantrell said, she has asked the mayor’s office for another “notice to vacate” the encampments in the area between St. Charles Avenue and the river. The city’s legal department is evaluating that constitutionality of that request, a spokesman for her office said.

Likewise, city law already prohibits the obstruction of streets, sidewalks or other public land by “any debris … or any other articles whatsoever.” On Thursday, Cantrell will ask her fellow City Council members to add the following sentence to the law, spelling out more specifically that tents, mattresses and furniture are unacceptable obstructions as well:

Unless lawfully permitted, the erection or placement of any tent, item of household furniture not intended for outdoor use, or other semi-permanent structure shall be considered an encumbrance/obstruction when placed on any of the public places or rights-of-way set forth in this Section. Permanent obstructions shall be prohibited.

The original law — which applies citywide — already contained that idea, but the new language puts that intent into writing. The language, Cantrell said, should assist the NOPD and other city agencies when they are dealing with the issue.

“That makes it clearer for them to enforce the law, but it has always been against the law,” Cantrell said.

What the new language will not do, however, is prohibit the homeless people from returning to underneath the overpass or other areas. It only prohibits the tents and other furniture — meaning that the larger problem remains unsolved.

Since the sweep, Cantrell says she has been personally working with two homeless families that illustrate the difficulty of addressing the broader issue in a humane way. One was a nursing mother whose infant child was placed in foster care after the sweep, leaving the woman bearing the physical pain of not being able to nurse and the psychological trauma of being separated from her baby. Another couple refused to be placed in a shelter because they didn’t want to be separated.

“It’s also caring not only about you, but it’s the brothers, the husbands, the mothers, the daughters, the sisters that are in these encampments. They’re people,” Cantrell said. “They matter.”

Since the sweep, Cantrell said she has begun receiving correspondence from residents near the new encampments that has been disrespectful to the point of insulting.

“I do believe it’s extremely unfair to say that we’re ‘doing nothing,'” Cantrell said. “I think that’s ridiculous to make that statement.”

Instead, she said, she needs residents to help provide solutions beyond just a never-ending series of sweeps. Since she herself was a neighborhood leader in Broadmoor, she said, she has believed that the most effective answers come from the people living closest to the problem.

“We literally are the world’s greatest experts on our communities. The only way I know in terms of solutions that are sustainable and transformative and impact people’s lives, are coming from people saying, ‘I’m open to ideas,'” Cantrell said. “As long as I’m the council person of this district, I will always seek input and solutions from the ground, because I believe you the get the best and most creative from the people.”

Cantrell spoke for about 15 minutes at the beginning of the Coliseum Square meeting, taking a few questions and comments on the details of the law change but leaving quickly so that Convention Center officials could begin a presentation on their expansion plans. As she left, Cantrell reiterated her plea for any residents with more ideas to her office.

“I’m serious when I say I’m looking for solutions, because I don’t have them,” Cantrell said.