A conceptual drawing of the proposed riverfront expansion of the Convention Center, including a new hotel. (via mccno.com)

As plans progress on a nearly $1 billion expansion into the Lower Garden District, the Ernest N. Morial Convention Center is proposing a realignment of several streets to improve traffic flow through downtown, a new centralized hub for buses and taxis under the Pontchartrain Expressway, moving sidewalks to get conventioneers around the nearly mile-long facility, and possibly even an expansion of the riverfront streetcar to connect the upriver end of the project with the French Market, officials told neighbors Monday night.

The convention center has already begun seeking a developer for the expansion, which would include a new four-star hotel, high-end shopping, and more exhibit space on land between the Pontchartrain Expressway and the old Market Street Power Plant, officials said Monday at the August monthly meeting of the Coliseum Square Association.

To prepare for the project, the center has been studying traffic patterns throughout the Central Business District and Lower Garden District areas, and are proposing a number of changes that will improve traffic flow now enough to handle the increased traffic from the project, Convention Center board president Melvin Rodrigue and other officials told residents: 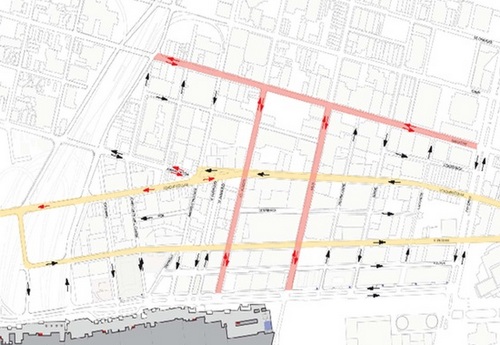 The plan leaves room for another major future component not directly included in this expansion, officials said: Tulane University’s major parcel along the river, currently leased to Mardi Gras World. That property was once considered for a “Riversphere” facility that would include educational and research components, and Convention Center officials support Tulane’s plans in that direction.

Whatever Tulane does, they said, would only be a further draw for convention-goers to return to New Orleans.

“What we want to do with this is make it a new experience in New Orleans,” said convention center general manager Bob Johnson. “It’s the old Disney theory: Every two or three years, Disney opens a new attraction and people that are familiar with Disney will go back. … It would also put Tulane’s brand in front of a million people a year.”

Further, Rodrigue said, it would give New Orleanians more access to the riverfront as well.

“Public access to the river is integral to our growth in the industry,” Rodrigue said. “It would not just be opening access for meeting goers, but opening it for residents alike.”

The Convention Center expansion is still years in the making. The Convention Center has issued a request for proposals — which will begin to provide more detail on what exact amenities will be included in the expansion project — and has begun hearing back from some of the top developers in the world, Rodrigue said. The expansion will include about $170 million of the Convention Center’s money — drawing from its reserves and from bond issues — and an anticipated $700 million from the private developer, so Rodrigue said he expects spending 18 months weighing different proposals to ensure the right project is chosen.

Officials estimate that construction would begin some time in 2016. The hospitality industry — currently employing around 80,000 people in the area — could grow by as much as 12,000 to 15,000 jobs between now and 2018, Rodrigue said.