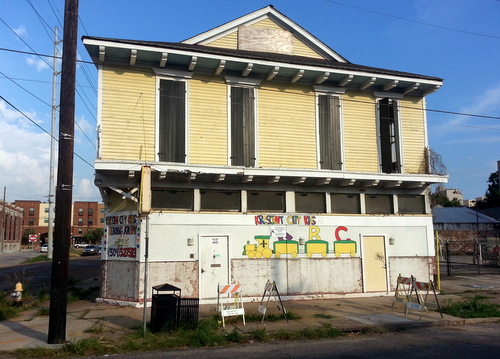 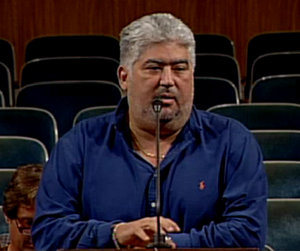 Adolfo Garcia speaks Monday before the New Orleans Board of Zoning Adjustments. (via nola.gov)

Demonstrating the degree to which the redevelopment of O.C. Haley Boulevard has taken off, city officials on Monday compared the Central City corridor to busy Magazine Street as they discussed the need for parking they expect in the very near future.

Garcia and several partners bought the former child care center at 1800 Oretha Castle Haley Boulevard in June, and he plans to convert its first floor into a restaurant, he confirmed in an interview Monday afternoon.

“We think that bringing another restaurant into the neighborhood is going to bring some foot traffic into the neighborhood,” Garcia said, noting the similarities between O.C. Haley now and Freret Street a few years ago, when High Hat and Ancora opened. “The foot traffic on Freret Street is amazing right now, and hopefully we can do the same thing on OCH.”

The renovation is still months down the road, so Garcia wants to keep what kind of restaurant he has in mind under wraps a while longer, he said. But the location is ideal, Garcia explained — situated in the Uptown area but with direct access to the Central Business District, and immediately surrounded by major upcoming projects such as the Southern Food and Beverage Museum at 1504 O.C. Haley, the New Orleans Jazz Orchestra headquarters, and the Jack and Jake’s market in the former Myrtle Banks school at 1307 O.C. Haley.

“I was down there eating at Casa Borrega a while back, and I saw what was going on with the street,” Garcia said. “There’s a lot of action going on. It’s got great bones, kind of like Freret did.”

The restaurant will have more than 3,000 square feet of floor space, and the proposed change in use from the previous business triggers the city to revisit its parking requirement: 21 off-street parking spaces for a building of that size. The property currently has no off-street parking, but the child care center had six spaces grandfathered — leaving Garcia and developer Tad Mondale asking the city Board of Zoning Adjustments for a waiver of the remaining 15 spaces.

Mondale told the board that he convened a neighborhood meeting in July to discuss the project, and nearby business owners and business association representatives who showed up supported the parking waiver for the restaurant.

“Most of the business owners do seem to be pretty upbeat about our project,” Mondale said.

Attorney Terrance Prout, representing Majestic Mortuary across the street, appeared at Monday’s meeting to protest the parking waiver, however. Prout said that because the developers own other lots in the block, they should convert them to parking, just as Majestic has done.

“If this place is allowed to start without using its land for off-street parking, it will cause an immediate traffic issue,” Prout said.

The adjacent land is not nearly large enough to fit 15 spaces, Mondale said. They purchased it with the idea of selling them to another developer as the corridor continues to develop, but have considered a “Plan B” of making room for four parking spaces on the lot next door if the city required it.

“We would prefer to have the option to develop that into another tax-paying business at some point in the future, but as a fallback position we could get a total of four parking spaces out of it,” Mondale said. “You could get the benefit of us having four parking spaces, or there could be more benefit to the Oretha Castle Haley corridor by putting a building there which could potentially produce more tax revenue and add to the character of the neighborhood.”

Casa Borrega has seen a number of its patrons arriving by bicycle, Mondale said, a trend that the new restaurant hopes to encourage as well. BZA members questioned the safety of bicycling through Central City at night, but Mondale said the new commercial activity will make the area safer for bicyclists.

Ultimately, if the restaurant has the opportunity now to reduce future parking issues, it should do so, said Board of Zoning Adjustments members Todd James and Tommy Screen.

“On Magazine Street, we constantly have an outcry from the neighborhood, constantly have an outcry from residents, businesses in that area about congestion. We understand what’s forthcoming on O.C. Haley with everything that’s getting repaired, and a lot of those businesses do provide off-street parking right now,” James said. “We at least want to try to mitigate as much of that situation from happening again on O.C. Haley, similar to what’s happening on Magazine. That’s what’s to the better benefit of the neighborhood and the city, period.”

The board voted to postpone a decision on the parking-waiver request by 30 days so the city zoning staff have time to evaluate the “Plan B” proposal for four parking spaces.

“One day, there will certainly be the need for more parking on the street,” Screen said.

After the meeting, Garcia reiterated his hope to get his new restaurant on O.C. Haley open as quickly as possible.

“It’s exciting to have been part of success of Freret, and now we’re going move on to next project and hopefully make an impact on that street,” Garcia said.