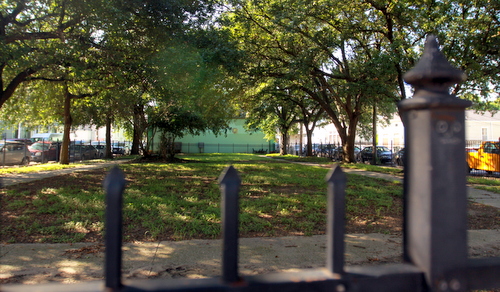 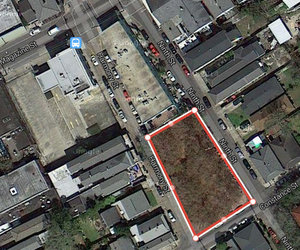 From the front window of the woodworking shop just off Magazine Street his father bought in 1930, Ruppert Kohlmaier can see a little wedge-shaped green space he also owns, and what he sees is a problem. Over the years, he has been threatened with lawsuits by people who claimed to be injured playing under its shady oaks, and now that he wants to build on it, his neighbors are angry at him.

When the neighbors around Constance and Harmony see the same space, they see a beloved pocket park, a crucial buffer between the modest homes of the Irish Channel and the busy commercial activity on Magazine Street. If Kohlmaier replaces the open area with a large building, they say, it will mean the removal of one of the few remaining green spaces in a neighborhood already under heavy redevelopment pressure.

Those conflicting viewpoints — simmering for weeks since Kohlmaier closed off the property with a sturdy iron fence — came to a head Tuesday afternoon at an unusually contentious meeting of the city’s architectural review committee.

The panel — known as the Historic District Landmarks Commission’s Architectural Review Committee — does not make judgments of use or zoning, but is charged with evaluating proposals to build in designated historic districts around the city. Even so, architect Kenneth Gowland of Metro Studio began by discussing the history of the property — it formerly held a large McDonogh school building, though that was apparently torn down some time in the 1960s.

Further, the property — a shady parcel at Constance and Harmony just behind Magazine Street’s Design Within Reach store — is technically not a park at all, city officials acknowledged on Tuesday — though that perception is so pervasive that it is mistakenly marked as such on the new Master Plan. Instead, it has been privately owned by the Kohlmaier’s family for several years, and it is currently zoned for a “neighborhood business district,” within which Kohlmaier’s proposal for a residential development is allowed.

The conversation, Gowland said, was a preliminary one, intended to help the design team get a feel for what the city’s panel of architects would deem appropriate for the site. Because so many different architectural styles surround the property — neoclassical and art deco, shotguns and galleries — Gowland said he is still deciding how to match the building to the neighborhood. In particular, he said, the block is a sort of gateway between the commerce on Magazine and the rest of the neighborhood.

The group of nearly two dozen Irish Channel residents who filled the small conference room at City Hall to standing-room-only capacity, however, said that any development of the space will be a loss for the neighborhood.

“We need an open spot,” said nearby resident Patti Henn. “The Irish Channel is already a very tight community, very tight with very little green space, and to take it away is taking a lot away from the Irish Channel. This park is very important to every single neighbor that lives there.”

Resident Scott Pentzer criticized the notion that the block is any sort of gateway. The green space signals to Magazine Street shoppers that the neighborhood has already begun, he said.

“It creates a nice buffer and a sense that ‘I’m transitioning from the Rendezvous bar, the Rum House, and I’m going to a neighborhood where people live,'” Pentzer said.

The HDLC architects focused their comments primarily on the design presented by Gowland itself. Magazine Street is unusual in that its commercial activity typically does not extend back into the neighborhoods behind it, they said — so any new structure should strive for a lower impact.

“Your site has no connection to Magazine Street,” said architect John Klingman. “That’s not a good way to think about it.”

“Part of the Irish Channel character is that it’s single-family houses almost completely, and the large buildings that break that mold are public buildings. A church, a school -– those are the big buildings, not multi-family housing,” said architect John Wettermark. “I think it’s inappropriate to make a grand gesture out of an apartment building.”

Further, Klingman noted that as the city becomes more aware of the need for water-retention strategies, placing a large building on the site will increase rainwater runoff, whereas the green space currently absorbs it. Historically, before being a school, the site was a market, he said.

“My sense is that, over the history of the city, is that this thing was open space more than it was occupied by an architectural object,” Klingman said.

A way to soften the impact of the building, the architects and city planners said, would be for it to have recessed areas back from the street. That would keep a sense of green space, Gowland agreed — because New Orleans has many green spaces that people can see without being able to enter them personally.

Architect Rick Fifield suggested that, if the Irish Channel residents are so committed to the idea of a park at that location, they should try to bring that to fruition. There are foundations and public land trusts that could help them attempt to acquire the land from the owner, he said.

“Since you have such a fine showing here in favor of open space, you need to act,” Fifield told the crowd.

The panel voted unanimously to defer the item, which essentially sends it back to the owner for further review. After the meeting, Gowland said that he and the owners will take all the opinions under consideration as they move forward. They do not plan to build anything that would exceed the limits of “neighborhood business district” zoning, Gowland said, and will likely meet with the architectural panel at least twice more to continue discussing the details.

Kohlmaier did not attend the meeting, but back at his woodworking shop afterward, he said he realizes his neighbors are angry, pointing to a flyer posted on neighborhood street posts rallying people to “save the park.”

“‘Save the park.’ What park?” Kohlmaier said. “There’s no park. It’s Mr. Kohlmaier’s personally owned piece of ground. Everybody went with this because I let everybody walk their dogs and I left it open.”

In the years since his father purchased the land from the school board and kept it open, Kohlmaier said, he has been threatened with lawsuits from people who said they got hurt on the property. Once it was someone playing on a makeshift rope swing, another time it was someone tripping on the tree roots, and he first had to get liability insurance on the property, and then fenced it in two months ago.

“They said I closed the park. There is no park,” Kohlmaier said. “I was just nice and kind enough to let them use it. I’m never going to do that again. If I own a piece of ground, I don’t want anybody on that ground. It’s not fair for people to go in there and get hurt and then blame me for it.”

Now, Kohlmaier said, his mind is made up to build on the land — not to sell it, and not to keep the property open any longer.

“I thought I was doing a nice thing, but evidently I wasn’t,” Kohlmaier said. “I’m all in my rights to build it. … I understand that they’re mad right now. If I lived there, I probably wouldn’t want a building there either — but somebody else owns it.” 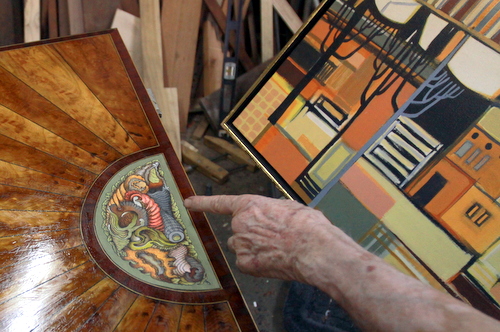 Ruppert Kohlmaier, a well-known New Orleans woodworker, gestures to the inlay he is designing on a custom chest of drawers in his shop next to the controversial green space. (Robert Morris, UptownMessenger.com)