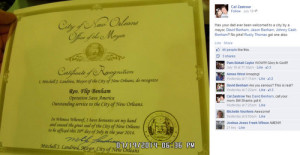 A proclamation from Mayor Mitch Landrieu commending Operation Save America for its service to New Orleans was issued this past weekend “in error,” city officials said Tuesday afternoon following reports that the group interrupted an Uptown church service on Sunday.

Members of Operation Save America — which is protesting abortion at numerous sites around New Orleans this week — had initially touted the July 20 proclamation from Landrieu’s office, which recognizes the group for “outstanding service to the city of New Orleans.” Responding to questions about the certificate on Monday, Landrieu’s office initially described it as “routine.”

Meanwhile, members of Operation Save America staged a protest inside the First Unitarian Universalist Church on South Claiborne Avenue on Sunday, interrupting a memorial to a church member who recently died and denouncing the denomination, later referring to it as a “synagogue of Satan.” On Monday, a petition was created at Change.org demanding that Landrieu rescind his welcome to the group.

On Tuesday afternoon, as news of the group’s activities spread, Landrieu’s office issued a second statement, saying that the proclamation was issued by mistake.

“It is customary for the City to provide standard proclamations to visiting groups that request them through the City’s web site,” said the second statement by Landrieu spokesman Tyler Gamble. “To be clear, the City does not endorse extreme or violent tactics, and this proclamation was issued in error. Any group can exercise their constitutional rights, but all of us have a responsibility to do so in a respectful manner. During these events, the NOPD is executing a robust security plan to keep the peace.”