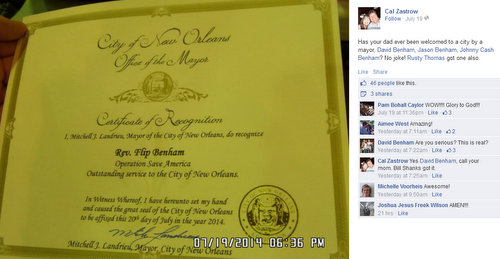 New Orleans Mayor Mitch Landrieu issued an official welcome this week to Operation Save America, an anti-abortion organization that interrupted an Uptown church’s prayer service with its protests on Sunday and had plans to parade the alleged remains of a fetus around Jackson Square in the French Quarter.

The certificate, which is dated July 20, extends Mayor Landrieu’s official recognition to Flip Benham of Operation Save America for “outstanding service to the city of New Orleans,” according to an image of the certificate being shared by the group on members’ Facebook pages. Supporters of the group were enthusiastic about Landrieu’s welcome, with one noting that “This is a first!”

Benham, director of Operation Save America, was found guilty of stalking in North Carolina in 2011 for distributing “Wanted” posters featuring the name and photo of a Charlotte abortion doctor, and sentenced to 18 months probation. A local organizer for the group, Pastor Dale Sochia of King Jesus Ministries in Boutte, told the New Orleans Advocate that they would be holding a funeral procession in Jackson Square on Tuesday featuring an open casket containing a “a real aborted baby.”

The mayor’s office on Monday downplayed the significance of the certificate.

“It is routine for the City to provide standard proclamations to visiting non-profits, faith-based organizations and conventions that request them,” according to an email from Tyler Gamble, a spokesman for Mayor Mitch Landrieu’s office. “As this group exercises its constitutional rights, the NOPD is executing a robust security plan to keep the peace.”

The group’s protest efforts have been focused on site of the future Planned Parenthood clinic on South Claiborne Avenue, but on Sunday, they took a different turn when members showed up inside the First Unitarian Universalist Church at Claiborne and Jefferson. The disturbance took place as the congregation was holding a moment of silence for a member of the church who had died the week before, said the Rev. Deanna Vandiver.

“Into that sacred silence, a voice began to speak, and it began to speak about ‘abominations,’ ” Vandiver said. The protesters were shouting that the church was not a true faith, she said. “Literally in our most tender and vulnerable space, religious terrorism began.”

The congregation was stunned at first, unsure what was happening, Vandiver said. She then invited the protesters to stay if they could join or observe the worship service respectfully, and if not, to take their protest outside the building. The congregation began to sing, and church leaders then began to lead the most vocal protesters outside, though a few chose to stay quietly through the remainder of the service.

In an account on their website, Operation Save America trumpeted the act as a victory for their mission in a “synagogue of Satan:”

At the Unitarian Universalist “church” in New Orleans, Deanna Waller, Jay Rogers, Mary Claire, Ken Scott, Russell Hunter, Toby Harman and others presented the truth of the Gospel in this synagogue of Satan. As God would have it, the “church” was filled with students from a “social justice” training school. According to Rev. Flip Benham, OSA National Director, the team presented a “dynamic witness.”

During an open “meditation” time, Deanna shared the Word of the Lord. When the female “pastor” took issue, Deanna reminded her that, “It would be better for him if a millstone were hung around his neck, and he were thrown into the sea, than that he should offend one of these little ones” (Luke 17:2). In violation of their “sacred tenants” of peace and tolerance, Deanna and others were summarily escorted out of the service.

Other saints stayed and dialoged until the conclusion of the service. It created no small stir. The “social justice” candidates ran to the Christians and asked them many questions. Our brethren gave them the reason for the hope that lies within them and defended the faith. Seeds of truth were sown. may the Lord water them in Jesus’ name.

Vandiver said she does not know specifically why the church was targeted. The denomination has a history of supporting pro-choice efforts, gay rights and other causes that Operation Save America opposes, she said, and the church on South Claiborne has specifically been supportive of Planned Parenthood in New Orleans.

“I think we were an easy target, because we’re literally just a few blocks down the road from where they’re building this clinic,” Vandiver said. “But we are not interested in being terrorized. Freedom of speech does not trump freedom of religion.”

In addition to protesting Planned Parenthood sites, Operation Save America is also holding demonstrations outside the homes of providers. A neighbor to one of those homes — who asked that his name be withheld out of concern that the group would target him — said his family has already endured two sessions of protests, with dozens of people holding signs on the sidewalk near his house featuring graphic images that he has done his best to hide from his young children.

“My kids are scared,” the resident said in an interview Monday afternoon. “It’s all these ugly pictures. They’re talking on the loudspeaker. I try to speak to them civilly, and it’s very difficult to do, because they’re looking for a confrontation.”

His requests that they turn down the volume, he said, were met with invective about the abortion provider instead. Ultimately, he said, he simply closed the blinds and turned up the music in the house until the demonstrators left, but the entire street is ready for the ordeal to end.

“It’s not necessarily the issue of abortion that’s frustrating to us,” he said. “It’s just their method of coming and taking over, and forcing us to deal with it.”

Operation Save America described their activities near the provider’s home in a similar fashion to their appearance in the church:

Finally, the neighborhood was encouraged to pray for [her], that she might use her medical skills to save life rather than destroy life. As often happens, the truth caused “trouble” for the community. But who brought the trouble, really? Just like Elijah, OSA members respond, “We have not troubled the neighborhood, but your abortionist neighbor has forsaken the commandments of the Lord and followed after the idol of child sacrifice. Have we become your enemy by telling you the truth?”

At the church, Vandiver said she found it “deeply troubling” that the mayor of New Orleans would issue any sort of endorsement to the tactics being employed by Operation Save America against the city’s residents.

“I find that a questionable act of leadership,” Vandiver said. “There are many beliefs about family planning in this country, but I feel like we have moral consensus about religious terrorism. A sanctuary is a holy space, and religious terrorism not welcome there.”

The resident near the protest site, however, interpreted the mayor’s welcome to the group as a political move.

“It’s a Catholic city. If you come out as staunchly pro-choice or against these activists, it would be difficult for him politically,” the resident said. “Politics is politics. Personally, I’d prefer if he’d tell them to get lost.”

On Monday afternoon, a petition at Change.org was gathering signatures asking Landrieu to rescind his welcome to the group.