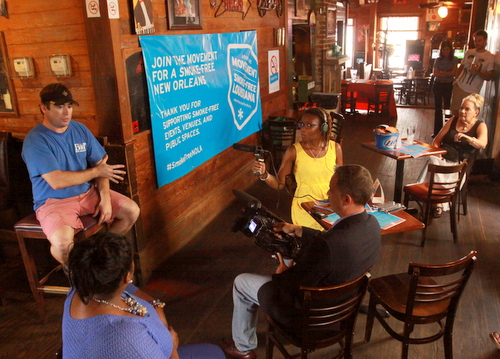 This week, City Councilwoman LaToya Cantrell’s office is launching a series of events — call it a blitz, maybe a crusade — promoting her vision of smoke-free bars across New Orleans.

Wednesday’s event at Carrollton Station was intended to be a forum for bar owners to discuss the issue. Despite personal invitations from her staff to proprietors and public announcements in a variety of media outlets, however, the only person from the public to show up was a single, angry, ardent smoker.

Why the low turnout? Carrollton Station owner Michael Miller — who took the bar smoke-free when he bought it last year — said that many of his colleagues likely see the smoke-free trend as inevitable, and may even be privately looking forward to such a ban.

“The opposition we’ve gotten has not been from bar owners,” Anna Nguyen, a Cantrell staffer, agreed afterward. “It’s been from patrons.”

How Carrollton Station kicked the habit
Carrollton Station was Miller’s own “neighborhood bar” back in the 1990s, he said, where he both worked and socialized until 2002, when he and his wife moved to a ski resort in Steamboat Springs, Colo. When they opened their own bar in Steamboat Springs in 2005, their first day with a liquor license was coincidentally the first day the town’s new smoking ban on bars was enforced.

Smoke-free had already been a trend there for years, Miller explained. As more bars went smoke free, the smokers crowded into fewer and fewer bars where their habit was still permitted inside — and those bars became progressively smokier, and thus less inviting for non-smokers. In the end, it was the owners of the smoking bars who quietly supported the ban, Miller said — in part for relief from the increasing amounts of smoke, and in part to bring their old customers back.

When Miller returned to New Orleans and prepared to buy Carrollton Station in 2013, a fellow bar owner asked him what the single thing he’d like to change most about the bar would be. Making the place non-smoking, Miller replied — to which his friend called him crazy.

But Miller kept toying with the idea, and after a number of sleepless nights, finally decided to experiment with it in a fashion that might only make sense to New Orleanians: Carrollton Station “gave up smoking” for Lent, after Mardi Gras ended. After Lent ended, and the bar survived financially, Miller gratefully made the change permanent.

“Once you work in a smoke-free environment, it’s impossible to go back,” Miller said.

Voluntarily banning smoking is terrifying for bars, himself included, Miller said, because there’s always another bar around the corner where offended smokers can take their business. The only reason he was willing to consider it at the time was that Carrollton Station was rebuilding its clientele anyway after the sale, so he had very little business to lose. Meanwhile, his busiest, smokiest night was the Wednesday comedy show, and he was frightened that it would be devastated.

Instead, he said, business at comedy night doubled after the smoke-free policy — a result he never would have expected. The smokers all head outside between acts — sometimes almost emptying the room — and nearly everyone is happy.

“Ninety percent of the smokers’ feedback we’ve gotten is that they like it better, too,” Miller said.

Meanwhile, that friend who called him crazy for trying the no-smoking policy last year? His bar recently went smoke-free as well, Miller said.

Public health or social control?
Even if some bar owners do look forward to a ban on smoking, Wednesday’s meeting proved that Cantrell’s plan won’t come without a public fight. Marigny resident Elizabeth Stella made her way to the meeting intending to hit Cantrell’s staff “like a bomb,” she said, and wasted no time in unleashing an explosive tirade.

“This is not about public health. This is about control,” Stella said to the handful of clean-air advocates hosting the town hall. “This society has eroded civil liberties, and I am sick and tired of fanatics and whiners trying to govern my life and treat me like a 10-year-old. It’s time somebody put you people in your places.”

She has quit going to restaurants since smoking was banned inside them, she said, and now goes to her usual bars for her meals out. Furthermore, she said, isn’t alcoholism as big a threat to public health as smoking? Why not just return to Prohibition?

“This is nothing but hypocrisy,” Stella continued. “It’s time for you little twerps to rest your Messiah complexes. Nobody needs to pay to be treated like a dog, to be told to go outside to smoke.”

What about bars where musicians don’t perform? Stella asked. What about little neighborhood bars where the owners run the place, and they, too, smoke? Are they to be told they have to go outside their own establishment to smoke?

“Sometimes I think I’m living in the Soviet Union,” Stella concluded. “When I was a kid, this wasn’t even a damn issue.”

‘The end result’
Cantrell’s staffers and the Healthier Air for All group thanked Stella for her opinions, and tried to share the data they compiled for the meeting — that nearly 80 percent of Louisianans are non-smokers, and that prolonged exposure to second-hand smoke is as dangerous as smoking, particularly to bar employees and the musicians who depend on them as venues.

Studies in other cities that have been smoke-free for years have shown no significant revenue loss, said John Pourciau, Cantrell’s legislative director. With smoking bans in so many other places, it is a topic that can be easily studied.

“Because we believe we’re in the right, we don’t have to hide our opinion. The science is there. It’s been done for decades,” Pourciau said. “The end result will be legislation banning smoking in bars.”

Advocates of the change acknowledged that a number of aspects of the ban remain to be considered before the bill is written, particularly regarding the effect of pushing so many bar patrons outside. Will Carrollton Station and other bars still be able to continue allowing smoking on the patio? Many bars are in neighborhoods where the noise of smokers becomes a major issue — the former Jimmy’s Music Club (now The Willow) right across from Carrollton Station was legally required to engage in lengthy conversations with neighbors about noise management.

Miller, owner of the Carrollton Station, says he strongly sympathizes with smokers like Stella. It’s the happy-hour smokers who will be most heavily affected, he said.

“By the time smoking is banned, they look up and say, we didn’t get a voice,” Miller said. “Until it’s forced on them, it’s not really at the forefront of their minds.”

Stella’s concerns about rights resonate as well, Miller said. Even though he took his bar smoke-free — even though he wishes all bars in New Orleans would choose to go smoke free — he’s not sure he would personally vote for a law forcing that on them. But, he said, with more than 100 bars in New Orleans that already prohibit smoking, that tide has probably already turned permanently.

“It’s just the state of the world,” Miller said, as he headed back to serve a few $2 High Lifes to his own happy-hour crowd at the bar, who had happily ignored the whole meeting in the back of the room. “We just accept it all.”

10 thoughts on “Is a ban on smoking ‘even money’ for New Orleans bar owners?”