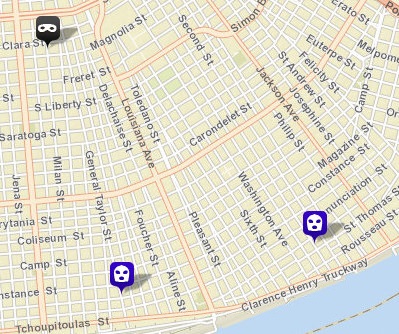 Two robberies and a home invasion were reported Wednesday in the Uptown area. (map via NOPD)

Two men were tied up by gunman robbing in a Milan Street home on Wednesday afternoon, while two other armed robberies were reported less than 20 minutes apart around the Irish Channel on Wednesday night, New Orleans police said.

In the home-invasion case, two men — one in his 50s and one in his 40s — were in a home in the 2700 block of Milan Street around 12:30 p.m. Wednesday when three people came in through a back door, according to the initial police report. At gunpoint, “the subjects tied the victims to a chair and ransacked the residence looking for money,” before leaving, the report states.

In the robbery cases, the first was reported at 9:28 p.m. in the 600 block of Third Street (near Chippewa). A man in his mid-20s walked past two men, and one of them pulled out a gun and took his backpack, the report states. The other assailant searched the victim for other belongings, the report states.

The second case took place at 9:46 p.m. near General Taylor and Laurel streets, about 17 blocks upriver from the first robbery site, reports show. A man in his late 20s was taking photos there when two men in a white, older-model Crown Victoria drove up, and the passenger leaned over the driver with a gun to demand the victim’s belongings, the report states. The victim complied and the car pulled away, the report states.

Anyone with information is urged to call Sixth District detectives at 658-6060 or CrimeStoppers at 822-1111 to leave an anonymous tip that could be eligible for a cash reward.