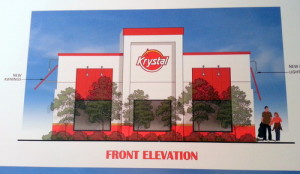 A new Krystal Burger restaurant on South Claiborne Avenue received unanimous New Orleans City Council approval last week, the first in plans for a wave of a dozen or more new locations around the area.

The plans were initially passed at a City Planning Commission meeting in late April, but needed City Council approval in order for the project to begin. The fast-food restaurant will use the building on South Claiborne between Earhart Boulevard and Napoleon Avenue that was previously a Kentucky Fried Chicken restaurant. The property has not been used since Hurricane Katrina.

There is currently a Krystal Burger on Bourbon Street, but the South Claiborne location will be the first Krystal Burger restaurant in the city that is managed and operated by the national corporate office, Councilwoman LaToya Cantrell said at the meeting.

The only other location that is operated by the Krystal company is in Marrero. According to Cantrell, more Krystal Burgers will be coming.

“They have made a commitment to develop other establishments throughout the city of New Orleans,” Cantrell said.

Krystal company officials said that there will be 15-20 stores in the city over the next three years, according to neighborhood meeting minutes held in January.

Bret Turner of Mouton Long Turner Architects previously said that it will probably take about two months to prepare the building and 70 days for the new renovations. Despite the many renovations, the company wants to have the restaurant ready soon.

“They would like to have it open in the fall,” Turner said.