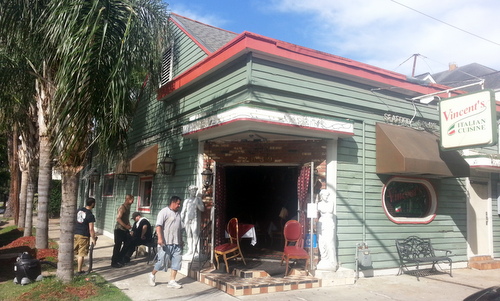 Employees clean up after what they called a “minor” fire Tuesday afternoon inside a wall at Vincent’s Italian Cuisine on St. Charles Avenue. (Robert Morris, UptownMessenger.com)

A small fire Tuesday afternoon was expected to close Vincent’s Italian Cuisine on St. Charles Avenue for the evening, but the damage was “minor” and employees hoped to see the restaurant reopen for dinner Wednesday.

Employees smelled a burning odor coming from inside a wall on Tuesday afternoon and called 911, said Vincent’s manager Jesse Mauer. “Nothing was ablaze,” and firefighters were able to contain the small fire to “minor damage,” Mauer said.

A number of employees were cleaning up from the incident around 5 p.m. Tuesday, and Mauer said Vincent’s would be closed for dinner Tuesday night. The hope, Mauer said, was to have the wall repaired in time for dinner Wednesday.